A greener way to convert alcohols to their corresponding bromides and iodides using visible light and without generating wasteful by-products has been developed by US researchers. The new method could provide an industrially viable alternative to existing routes.

The transformation of alcohols to their corresponding halides is one of the most widely used reactions in organic synthesis, but traditional methods often require harsh conditions and can generate high levels of undesired stoichiometric waste by-products that are difficult to remove from the reaction mixture.

Corey Stephenson and colleagues at Boston University have converted alcohols to halides using a photocatalyst that absorbs blue light from a light-emitting diode (LED) and polyhalomethanes such as carbon tetrabromide (CBr4) and triiodomethane (CHI3) as the halide source. 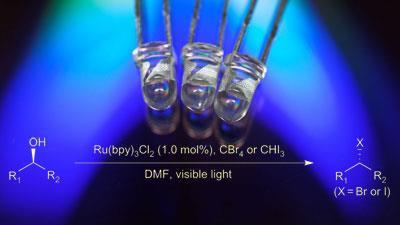 The greener method could be scaled up for industrial use

The CBr4 then dissociates to form a CBr3

radical and Br-. The CBr3

radical then combines with a dimethylformamide (DMF) solvent to produce a solvent active species that goes on to react with the alcohol to form the resulting halide at yields of up to 98 per cent.

’The use of this visible light activated photocatalyst together with the great yields achieved suggests to me that this certainly should be viable for scale up,’ says Peter Robertson, an expert in photocatalysis at Robert Gordon University in Aberdeen, UK. ’The authors use blue LEDs here and the power requirements from an engineering point of view would be more favourable than other UV activated processes,’ he adds.

’The scale that we can do the reaction on now is sufficient for what we need, but there is the possibility for some kind of flow apparatus to be used to scale up the process to an industrial scale,’ says Stephenson. The team is now looking at ways to expand on this reaction to develop a more general method for activating carbon-oxygen bonds for other nucleophilic displacement processes.