Drops of water have been micro-engineered into 'protocells'

Amazing what can be done with just a few drops of water. Chemist Matthew Holden from the University of Oxford, UK, and colleagues have micro-engineered water droplets into ’protocells’. The researchers are the first to connect protocells into tightly-controlled networks of water droplets. Each droplet is encased in a lipid membrane, so they can easily be shuffled around without disturbing the network and, by embedding various functional proteins in the membrane, protocell networks can mimic real biophysical events within living cells.

Oil and water famously don’t mix. But by using amphiphiles - lipid molecules with hydrophilic heads and hydrophobic tails - a lipid monolayer forms around each water droplet easing its passage through the oil, and hindering individual drops from merging.

The researchers prepared lipid-covered water droplets (Fig. 1, a-d), and then arranged them into a connected network on a miniature ’egg crate’ - a Perspex surface with a square array of micro-machined dimples. Drops can be removed and added without interfering with network integrity. Where they interface, the drops’ protective lipid shell forms a bilayer (Fig. 1, c and d), just like that around any living cell.

Holden’s team realised the bilayer interface could support protein-based ion channels (or pores), just like real cells. If the droplets also contained ions, then delicately piercing two droplets with hair-thin electrodes and bringing them together allowed application of a voltage that could drive an ion current through them.

’We also added gamma-cyclodextrin to one of the droplets as a reversible pore blocker’, said Holden. ’This showed it was the pores that were conducting ions through the bilayer, not current leakage.’

Certain bacteria use the green-light-sensitive protein bacteriorhodopsin (BR) to pump protons across their cells membranes during energy production. To mimic this process, Holden’s team formed four droplets around a central droplet, all containing buffered salt solution. Three of the surrounding droplets also contained BR, which migrated into the shared bilayers with the fourth drop, which contained protein pores (Fig. 2). 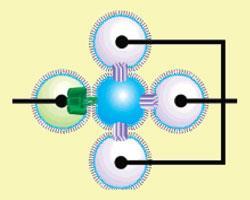 Fig. 2: Light-sensing network of droplets. The three mauve droplets contain bacteriorhodopsin (BR) and are connected to the same electrode. The green droplet contains a protein-based ion channel which connects it to the central droplet.

The three BR-containing droplets were connected to a common electrode and the pore-containing droplet to another. When the whole array was illuminated with green-light laser pulses, it induced an ion current to pass through the pores as the bacteriorhodopsin pumped protons across the bilayer membranes. The team have also produced a ’biobattery’ from three droplets in a row.

’We’re hoping to create increasingly complex systems as tools for understanding a wide variety of biological functions, such as heartbeats and nerve impulses,’ said Holden.