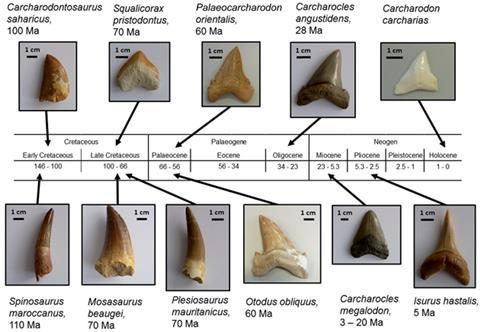 New research by scientists in Germany has uncovered a curious difference between present-day shark teeth and those of their prehistoric relatives. Although the tooth structure of extinct sharks, like the giant Megalodon, was remarkably similar to great whites and other modern-day sharks, the material they were made from bore a closer resemblance to dinosaur teeth and hints that this change in composition might be down to a dramatic environmental change.

Most animal teeth contain a layer of hard enamel, a soft dentin middle and inner pulp. Dentin and enamel are usually composed of the mineral hydroxyapatite but modern-day sharks differ; their enamel equivalent uses fluoroapatite.

‘The abundance of fossil teeth is ideal to compare extinct groups and their successors,’ explains Matthias Epple from the University of Duisburg-Essen, Germany, whose team studied the composition and structure of teeth from extinct sharks and dinosaurs.

‘Our results indicate a change in tooth mineralisation after the Cretaceous period, perhaps related to environmental changes, that made fluoroapatite unfavourable,’ comments Epple. Fluoride is scarce in seawater; sharks must harvest it from a diluted system, which is important for a species that regularly sheds teeth. ‘Maybe this is why sharks changed to hydroxyapatite in their dentin?’ he adds.

Henry Teng, an expert in natural minerals from George Washington University in the US, describes the research as very intriguing. ‘If it occurs widely, it may have implications for the Earth’s environmental evolution. If the mineral change gave no biological advantage, I imagine tectonic or asteroid events may have reduced the availability of fluoride on the Earth’s surface.’

The study raises further questions about fluoroapatite. At pH4 – for example in acidic fruit – fluoroapatite releases toxic hydrogen fluoride. For sharks and plesiosaurs, this would be washed away, but on land it would remain in the mouth. ‘The carnivores might not have eaten fruits, but may have encountered acids when eating their prey. However, the dose was possibly too small to be harmful so I do not think that dinosaurs became extinct due to the uptake of fluoride from their teeth,’ concludes Epple.