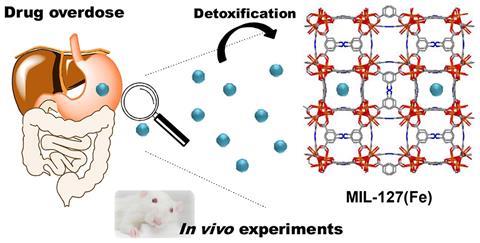 A metal–organic framework (MOF) could one day help people who have overdosed on aspirin and other pain medication. Researchers have shown for the first time that the porous material made out of iron and an azobenzene reduces salicylic absorption in rats’ stomachs and gut as much as 40-fold.

MOFs are known for their enormous internal surface area, which means they can store gases, disable chemical weapons and make for some unusual catalysts. They can even make painkillers last longer. Now, Patricia Horcajada from the IMDEA Energy Institute in Spain, leading a team from Tunisia and France, has discovered that she can use a MOF’s pores to detoxify one of the most common poisons: salicylic acid, also known as aspirin.

Pain medications lead the US National Capital Poison Center’s list of substances involved in accidental or voluntary overdoses. While mild and moderate overdoses lead to nausea, fever and dizziness, a severe salicylate poisoning can cause hallucinations, seizures and even fatal cardiopulmonary arrest. Patients are usually treated with repeat doses of activated charcoal to try to adsorb the salicylic acid before too much of it reaches the blood stream.

However, although charcoal adsorbs 94% of the drug in the stomach, 11% of this is lost as the pH increases in the gut and salicylic acid converts into salicylate. Horcajada’s MOF – an iron–azobenzene lattice called MIL-127 – doesn’t have this problem. Although it only adsorbs 34% of salicylic acid, it keeps hold its cargo even when the pH changes.

Rats given 10times the safe dose of aspirin, followed by a course of MIL-127, had three times less salicylates in their blood and urine after 24 hours than those that weren’t administered the detox MOF. Since the he MOF itself isn’t toxic – its particles are simply too large to pass through the intestinal wall – the researchers hope that similar porous materials could make for safer and more effective poisoning treatments.