MOFS make light work of it

UK researchers have discovered a new use for metal-organic frameworks (MOFs) - as potential lighting devices.

MOFs consist of inorganic nodes connected by organic linker molecules to form three-dimensional molecular cages. So far MOFs have attracted interest as a way to store gases such as hydrogen or carbon dioxide, or as novel catalytic materials.

Now, Anthony Cheetham from the University of Cambridge and colleagues have shown that MOFs can also act as a novel source of white light.

Around the world the hunt is on for new low-energy ways to produce white light through light-emitting diodes (LEDs), to replace traditional incandescent and fluorescent lighting. The key is to develop new phosphors - materials that emit white light after being energised by electrons or UV light via the LED.

Inorganic and organic phosphors exist, each having advantages and disadvantages. Inorganic phosphors tend to be more stable and can operate at high temperatures, but stimulating them with the correct wavelength of UV can cause problems. Pure organic phosphors can be bright and efficient but usually need to be in solution, which makes packaging difficult.

Cheetham’s team has shown that a hybrid organic-inorganic phosphor, in the form of a MOF, might be able to achieve the best of both worlds. The researchers created MOFs from the intrinsically luminescent organic ligand
9-fluorenone-2,7-dicarboxylic acid together with calcium or strontium. 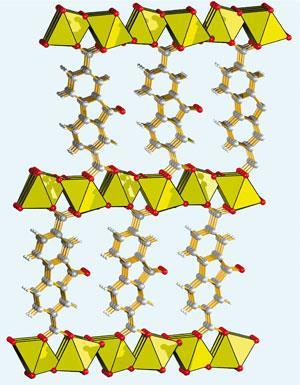 ’These form a rigid structure which holds the organic ligands in place, which absorb light strongly,’ says team member Joshua Furman. ’We see an increase in the light conversion efficiency in the calcium-fluorenone structure over a purely organic sample of the fluorenone ligand.’

The colour of the emitted light changes with the choice of metal cation, making the system tunable.

Furman says that the research area is now open to investigate a range of MOFs for different applications. ’The field got off to a strong start with a search for gas storage and catalysis materials with everyone looking for porous structures and zeolite analogues,’ he says. ’Along the way a great number of new dense structures have been made which while not interesting as a storage material may show interesting electronic, magnetic, multiferroic and optical phenomena because of their arrangements.’

Robert Withnall, from the centre for phosphors and display materials at Brunel University in the UK, says that the new work is interesting. While the brightness, temperature-dependent emission behaviour and stability of the materials are below what would be required for a commercial device, Withnall says, ’such inorganic-organic phosphors would have the potential to be used for solid state lighting applications if higher performance materials can be developed.’