Chemists in Germany have invented an elegant way of insulating a molecular wire with a double helix wrapper. Researchers led by John Gladysz at the University of Erlangen synthesised molecular ’beanpoles’ - where tethered carbon chains snake spontaneously around the central carbon wire, like runner bean plants twining around their supporting pole.

As Gladsyz explained, long conjugated polymers which shuttle electrons back and forth can be unstable and need to be protected from disruptive molecules around them - such as oxygen, water, or even other molecular wires if gathered in bundles. Efforts to insulate wires have included threading them through hollow cylindrical molecules like cyclodextrins or cyclophanes, or burying them in a thicket of branched dendrimers. These piecemeal sheaths don’t always cover the whole wire, and can themselves contain reactive groups. 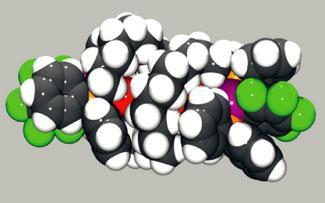 The researchers took inspiration from the way DNA wraps protectively around its own base pairs in a double helix structure. DNA’s helical curves are encouraged by a series of internal bonds. But Gladysz’s team didn’t need to introduce any hydrogen bonds or metal templates to induce their double helices to form. They simply tied two loose carbon chains, via phosphorus ligands, to both ends of a platinum-capped conjugated polyyne (a molecular wire). As they were tied, the chains automatically curled up in a protective double helix, effectively shrink-wrapping the polyyne core.1

The concept of forming a double-helical molecule without any deliberate templating - aside from the tethering constraints - is unheard of, Gladysz believes. But the carbon chains didn’t always self-assemble in a helix, he conceded - only certain lengths had this satisfying property. And in solution, even those didn’t stay permanently twisted.

Gladysz’s team got round this problem by - perhaps less elegantly - connecting chains in two sections and tying them, via a metathesis reaction, in the middle.2 This strategy also created helical sheaths, which the researchers hope to maintain in solution by adding groups that would attract the helical chains to their central cores.

Whether the new carbon double helices are any better protectors than other sheaths remains to be seen, but they are at least unreactive. And early electrochemical studies suggested that wires wrapped inside helices were more stable than their unwrapped cousins.

Gladysz hopes to makes various bundles of insulated wires using his method, though at the moment a large-scale application isn’t practical, since the current synthesis is too slow. Nonetheless, commented Paul Low, who works on organometallic molecular wires at the University of Durham, UK, Gladysz’s research is ’a fantastic example of imaginative synthetic work’; while Uwe Bunz, of Georgia Tech University, US, told Chemistry World the concept was ’brilliantly conceived and executed’.