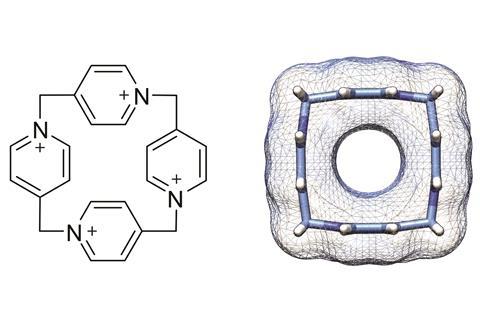 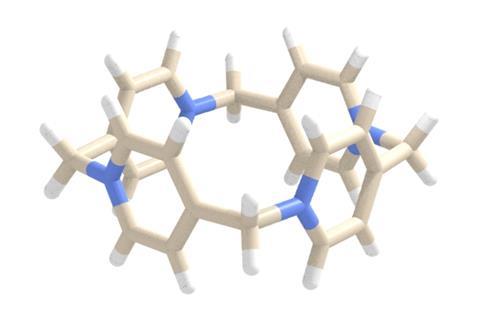 Scientists in Poland have made the most compact multiply charged macrocycle to date. Pillar[4]pyridinium is a cyclic tetramer consisting of four pyridyl units with methylene bridges between their nitrogens and para carbons. The quadruply charged molecule has a very symmetrical and incredibly strained structure. It represents a new class of cationic macrocycles, the pillar[n]pyridiniums.

Volodymyr Sashuk and his colleagues at the Polish Academy of Sciences made the unusual structure by performing a condensation reaction of 4-(bromomethyl)pyridine hydrobromide under basic conditions and in the presence of ammonium hexafluorophosphate. The reaction product came as a big surprise, initially they had only expected to make either a cyclic pentamer or hexamer.

Previous studies on analogous reactions only gave linear products. Adding ammonium hexafluorophosphate, which acted as a template, turned out to be crucial. Single crystal x-ray analysis showed a good fit between hexafluorophosphate ions and the macrocycle’s square cavity, with electrostatic interactions holding the two moieties together.

Pillar[4]pyridinium’s square and electron-deficient cavity recognises fluoride in water. The researchers suggest that larger pillar[n]pyridiniums might be useful receptors for electron-rich molecules so could catalyse reactions that occur via negatively-charged transition states.