Magnetic refrigeration taken to below 1K for the first time 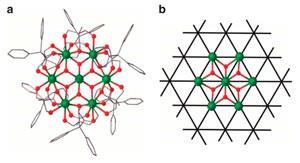 Researchers have succeeded in cooling a molecular magnet to below 1K, the first time this has been achieved with a nanomagnet. The finding is important because it demonstrates experimentally that such low temperatures are achievable, opening the possibility of novel refrigeration systems. The work has also shed light on aspects of the nanomagnet’s quantum behaviour.

Certain molecular systems exhibit unusual and exotic magnetic behaviour, driven by quantum mechanics, which might one day be harnessed for applications such as quantum computing. One phenomenon of interest is the magnetocaloric effect (MCE), whereby when an applied external magnetic field is removed from a magnetic material, there is a reduction in temperature.

Eric McInnes, of the University of Manchester in the UK, and colleagues prepared a molecular cluster containing seven gadolinium centres, with six forming a hexagon and one sitting in the centre. ‘Each gadolinium ion is magnetic and in this structure we expect the weak interaction of these magnetic ions to produce a large MCE,’ McInnes says.

When the team carried out the MCE experiments with samples of the crystals, the temperature fell to around 0.2K, the first time a molecular nanomagnet has achieved sub-Kelvin cooling. The researchers noted that as the magnetic field was withdrawn, the drop in temperature was not linear, rather it was ‘bumpy’, which provides an insight into the quantum state of the system.

Each gadolinium centre sits at the corner of a triangle; the electrons in these positions want to pair their spin with their neighbours at the other corners of the triangle; but because there are three of them, one at each corner, they cannot all align simultaneously. This is termed ‘spin frustration’.

‘As the demagnetisation proceeds, the spin frustration leads to a metastable spin state in a certain magnetic field range, which causes a temporary rise in temperature, before the system continues to cool on decreasing the magnetic field,’ McInnes says. ‘We set out to exploit the spin physics to achieve refrigeration in this magnetic molecule, and we succeeded in that. But in fact the cooling behaviour of the system revealed new insights into the spin physics, and we discovered more about the quantum magnetic properties of this system than we knew before we started.’

Commenting on the work, Euan Brechin, of the University of Edinburgh in the UK, says: ‘What this demonstrates is that certain types of polymetallic molecules are realistic candidates for employment in a Carnot cycle [the thermodynamic process used to create prolonged refrigeration], and that they offer more freedom to design the cycles according to specific needs.’