Dutch scientists have succeeded in a long term goal to reverse the direction of their molecular motor with some simple chemistry.

Ben Feringa’s group at the University of Groningen in the Netherlands been working with molecular motors for years, making small organic molecules that rotate when exposed to light. However, until now these motors have only had a forward gear.

Feringa has now exploited a simple epimerisation reaction to stop his motor and change the direction of rotation with the addition of a base.

The light-driven rotation of the motors works by inducing a conformational change in the motor, converting it to a less stable orientation, before thermal relaxation changes the conformation again. By repeatedly shining the light on the molecule and then heating it, the rotor is taken from stable to less stable conformations and back again, and as it changes from one isomer to the other it rotates around an axis.

Reverse gear is chosen by reacting one of the less stable isomers of the motor with a base. This inverts the stereochemistry of a chiral centre so that when the cycle of light and heat is restarted, it sends the motor in the opposite direction. 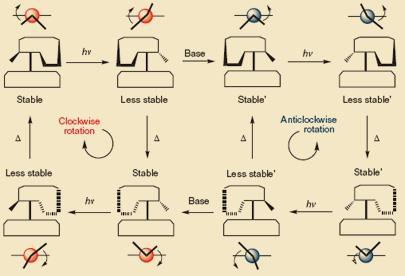 Light and heat cause the molecular motor to rotate, and reacting a less stable isomer with a base triggers the motor to reverse the direction it is rotating

Unlike biological molecular motors, like the flagella of bacteria or ATPase, which changes direction depending on the job it’s doing, synthetic molecular motors always just had a single direction of rotation. Feringa says that he is inspired by nature, and describes engineering a reverse gear for his motors as a ’longstanding challenge’.

David Leigh, who designs molecular motors at the University of Edinburgh, UK, describes the work as elegant and extremely well done. ’Of course,’ he adds ’you then need to find a problem for molecular motors to solve, but biology uses molecular motors for everything and it’s not doing that for no good reason.’

Leigh believes that once they manage to gain full control over molecular motors it will change people’s approach to functional molecules and material design. Feringa agrees and is hoping to use his motor on more complex systems, perhaps to control the helicity of polymers or maybe introducing them into cell membranes. But Feringa also believes that this work could mark a turning point, a change in direction not just of his motor’s rotation, but moving away from equilibrium systems to using dynamic systems like he has. ’I think this is even more important than what we can do with the motors,’ he concludes.