For many years chemists have sought to emulate how the single chemical fuel adenosine triphosphate (ATP) powers natural motor proteins inside cells. Now, David Leigh’s group at the University of Manchester, UK, has finally achieved that goal.1 And just two days earlier, Ben Feringa’s group at the University of Groningen in the Netherlands published their own study nearing the same goal with a different motor system.2 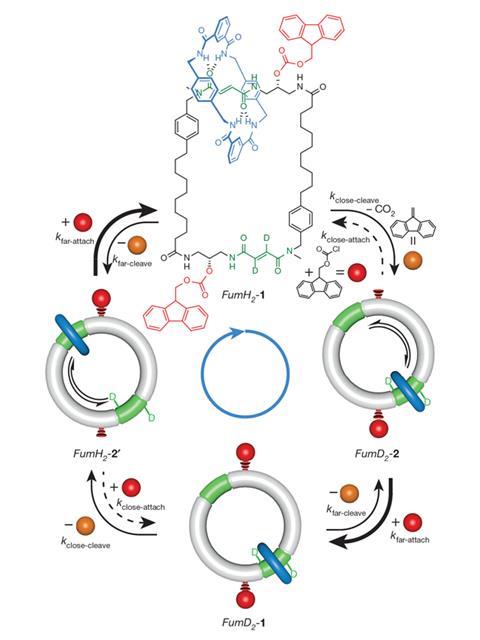 ‘Motor proteins are huge molecular structures,’ Leigh emphasises. ‘Scientists are starting to make molecular machines that are much less complex.’ He concedes they’re currently slow, inefficient and can’t do much, but compares them to the first cars. ‘Without Karl Benz’s 1885 horseless carriage, we wouldn’t have today’s Mercedes Formula 1 racing car.’

Ultimately such systems could transport materials, Leigh suggests, for building new molecules or delivering them into chemical analysis tools. They could even power tiny robots or factories.

Both Leigh and Feringa’s groups have worked on molecules moved by reactions since the turn of the millennium. Leigh’s team’s motors, first developed in 2003, are intersecting pairs of large ring-shaped molecules known as catenanes.3 Previously, the chemists made one ring move around the other with great difficulty. ‘They required a series of chemical reactions that occurred in a specific sequence,’ Leigh says.

A barrier can be a fuel

The Manchester scientists published a catenane design that operates continuously in the presence of fuel on 8 June. It consists of a small ring ‘directionally biased’ to travel clockwise around a larger one. At opposite ends of the larger ring there are two sites that tightly clasp the smaller ring through hydrogen bonding. 99% of the time the smaller ring is attached to these sites, and in the other 1% it’s being jostled between them by collisions with other molecules, Leigh explains.

Immediately clockwise around the larger ring from each of these sites is a hydroxyl group that the ‘chemical fuel’ 9-fluorenylmethoxycarbonyl chloride (Fmoc-Cl) can react with and attach to. Unexpectedly for a fuel, Fmoc physically prevents the smaller ring travelling past. To drive clockwise movement, Leigh’s team put the interlinked rings in conditions that are constantly adding and removing the Fmoc barrier.

This works for a subtle reason: the Fmoc fuel/barrier’s attachment rate varies, while its removal rate remains the same. Fmoc attaches to the hydroxyl groups slower at the end of the larger ring where the small ring is sat. Consequently, the Fmoc barrier is always more likely to be absent when the small ring is about to be nudged clockwise past the next hydroxyl group. Were the small ring nudged anticlockwise, it would be more likely to find an Fmoc barrier guarding the binding site, and soon return to its starting position.

Charles Sykes from Tufts University, US, calls the approach ‘an elegant proof-of-principle system that mirrors biological machines’. However, he adds that it’s ‘slow and rather inefficient because a lot of the fuel burns before it even reaches the motor’.

‘Now the challenge for us – and hopefully others – is to make much more efficient and effective motors and to use them to perform tasks,’ Leigh responds.

By contrast, the Groningen group, whose latest study was published on 6 June, use carbon–carbon bonds in their molecules as rotors. Bulky chemical groups sit at either end of such bonds, and reactions cause one group to rotate with respect to the other, like a wheel on an axle. 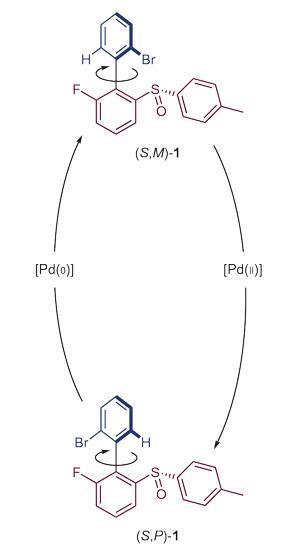 The new system builds on work Feringa’s team first did in 2005, using biaryl molecules, which have aromatic rings at either end of a carbon–carbon single bond.4 Then, they used purely chemical means to progressively corkscrew the rings round, however it took four separate sets of reaction conditions to produce a full turn.

While the new systems still takes four steps with different conditions to rotate the key reactions, carbon-hydrogen bond activation and oxidative addition, rely on palladium metal catalysts.  In each case a palladium complex binds to both the rings connected by the rotor bond. The two key chemical processes each lead to an 180° twist of the upper ring in their molecules in relation to the lower ring, driving a complete rotation overall. ‘The system opens the way to catalytic rotary motor systems,’ Feringa says. ‘Building a chemically-fuelled system is the next step.’

Sykes emphasises that sequential addition of reactants makes the biaryl system even slower than the rotaxane motor. ‘However, the redox nature of the catalytic system offers the future possibility of controlling molecular motors via electrochemistry,’ he adds.

Palladium’s role underlines what all molecular motors have in common, be they biaryl, catenane, or ATP-powered proteins, Leigh observes. ‘The motor is a catalyst for the converting high energy chemical reagents to lower energy waste products,’ he says. ‘The key is to use the energy to power motion.’