Teams of automated programmable molecular robots working together on nanoscale assembly lines are one step closer, say US scientists

Teams of automated programmable molecular robots working together on nanoscale assembly lines is one step closer, say scientists in the US.

A collaboration between four US institutions has developed a ’molecular spider’ whose direction and motion can be controlled to make it travel along a particular path,1 while a separate team led by Ned Seeman at New York University has developed a nanoscale assembly line that can be programmed to ’manufacture’ eight different products.2

Milan Stojanovic and colleagues from Columbia University and collaborators at Arizona State University, the University of Michigan and the California Institute of Technology developed their DNA walker - a spider-shaped molecule made of DNA - to move along a fixed track on a surface. ’We don’t use a remote control or anything like that so essentially we wind it up, release it and away it goes,’ says Stojanovic.

The walker is made up of an inert body and four single strands of DNA. Three of the strands act as legs and include DNAzymes - DNA molecules that catalyse a chemical reaction - while the fourth strand anchors the walker in position at the beginning of the path until it is ready to move. The path surface is programmed to initiate the ’walking’ process and is made of folded DNA strands designed to complement the DNA in the legs of the walker. 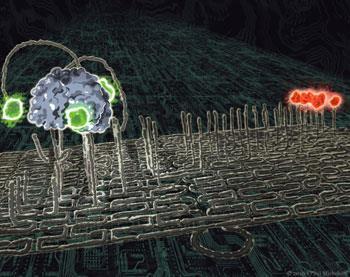 DNA walker moves along a fixed track on a surface

The legs form duplexes - double stranded links - to the complementary strands in the surface. One of the duplexes is cleaved and the leg explores the surrounding surface forming another duplex at another position. If the leg binds to a position already visited, its stay there is brief as it ’remembers’ the process; for new positions, the cleavage takes longer. By repeating this process the walker moves along the surface independently. At the end of the track the walker binds to uncleavable DNA strands and stops.

Seeman comments that Stojanovic’s team has developed ’a really great autonomous system that will walk on one trajectory over a path’. ’They have made far more steps than we made in the past, but this is only in one direction,’ he adds.

Stojanovic explains that the next step will be to introduce more than one walker molecule and programme the behaviour of the spider so that it chooses between two paths. ’The wildest dream might be to have a swarm of robots that repair torn ligaments,’ he adds.

Seeman and his team took their research in a different direction, developing a system in which a DNA walker travels along a path with three DNA ’modules’ at fixed intervals in an assembly line arrangement. The modules hold a cargo of gold nanoparticles and are individually programmed to either donate or keep their cargo, so as the DNA walker passes by it can be loaded with cargo resulting in eight possible end products.

’I think of these DNA walkers as being similar to a chassis of a car rolling down the assembly line and we are adding components to it,’ says Seeman.

The DNA walkers in Seeman’s system differ from Stojanovic’s by having essentially seven ’limbs’. Four DNA strands are used as feet while the other three are used to carry the cargo donated by the DNA modules, which are anchored to a DNA origami tile that acts as the DNA walker’s track.   In addition, the walker is moved, not by DNAzymes in the DNA leg strands, but by externally controlled ’fuel’ strands that are added to displace the feet, so they move to other positions. In this way, Seeman can control the binding and releasing of the feet and have greater control over the end products.

’The next step is to improve the system so that we can have these assembly lines churning out products and make the assembly lines longer, providing more complex products,’ says Seeman.

Stojanovic described Seeman’s nanoscale assembly line as a masterful example of non-autonomous robotics. He describes Seeman as ’like a micro-surgeon that slowly organises materials on this scale by adding DNA strands and taking them away. It’s just beautiful work’.