Exploiting metallurgical phenomena has enabled the creation of an array of metallic, multi-walled hollow nanoparticles with exotic architectures

Scientists in Spain have used exquisitely controlled corrosion to create an array of elegant, polymetallic, hollow nanoscale structures with a wide range of architectures. The team suggests that such hollow spheres, cubes and cylinders could be useful as inorganic ’molecular suitcases’ to carry drugs or catalysts. 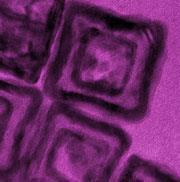 Galvanic deposition leads to the silver nanoparticles being hollowed out

The group, led by V?ctor Puntes of the Catalan Institute of Nanotechnology in Bellaterra, attacked suspensions of silver nanoparticles of various well-defined shapes and sizes, from 30nm to 100nm, with salts of gold, platinum and palladium either singly or in combination.

By controlling the chemical environment - with the addition of surfactants and complexing agents - the team could exert control over the way that the silver particles interacted with the oxidising salts of the other metals. In the presence of gold ions, the surface of the silver becomes covered with a thin layer of gold thanks to galvanic deposition - the same phenomenon that results in an iron nail becoming coated with copper when placed in a solution of copper sulfate. The gold steals an electron from the silver, becoming reduced to its metal. As the area of exposed silver surface of the particle decreases, the rate of oxidation of the remaining exposed surface increases, and eventually a pinhole is formed. The nanoparticle is then effectively hollowed out by oxidation, with gold continuing to coat the internal surface of the newly hollowed structure.

A second phenomenon then occurs, called the Kirkendall effect. This relates to the differential diffusion of metal atoms at an interface between two layers of metal - in this case the sandwich of silver between two layers of gold of the now hollow particle.  The net effect is a flux of silver atoms to create voids in the silver layer which eventually coalesce to form a continuous cavity within the silver. This cavity eventually meets the pinhole in the wall, allowing the galvanic coating of this new cavity by gold. The overall effect is to create a hollow metallic particle with a hollow multilayered wall. 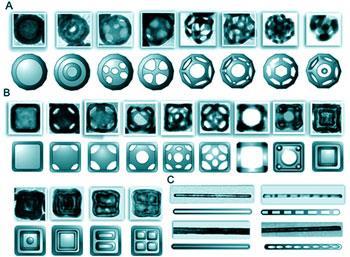 ’Different metal salts with different surfactants result in a range of patterns of attack, giving different architectures of the final structures,’ says Puntes. ’These are inorganic capsules, and there are not many examples of such structures at this scale. They could be used as molecular suitcases to carry a variety of luggage, such as drugs or catalysts.’

Commenting on the work, Mathias Brust, who studies metallic nanoparticles at the University of Liverpool in the UK, says: ’The Catalan team have produced an impressive piece of work that appears to be pushing the rational design and manufacture of multi-metallic plasmonic nano-objects to its limits, elegantly exploiting well established and robust methods borrowed from macro-scale metallurgy. This is very exciting, and has never been done this well before.’