Molecules that walk, hop and jump

’Two legged’ molecules walk, hop and fly across a receptor surface, according to researchers in the Netherlands and Ireland. The findings could help us understand how viruses and bacteria interact with cell membranes, they say.

Jurriaan Huskens and colleagues at the University of Twente, in collaboration with researchers at the University of Cork, monitored the spread of two-legged dye molecules across a monolayer surface of beta-cyclodextrin ’foothold’ receptor molecules using fluorescence microscopy. They observed that the molecules moved across the surface using three distinct mechanisms depending on the environment they were in. 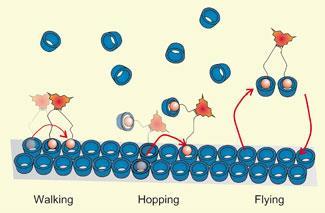 Huskens explains that the ’feet’ of the dye molecules are relatively weakly bound to the surface and so they adsorb and desorb spontaneously in a matter of microseconds. ’In the absence of any competitor, we see strong evidence that molecules are mainly walking, so one leg at a time desorbs from the surface and finds another site to bind to before any of the other legs detach,’ he says.

At the other extreme - when competition from free beta-cyclodextrin receptor molecules is high or when all the receptors on the surface at capped by other molecules - the legs of the dye molecules adsorb to free receptors in solution and then diffuse through the solution and bind somewhere else, say Huskens. ’This is the flying mechanism,’ he tells Chemistry World.

’They have succeeded in taking a collection of molecules that are weakly bound to a surface with two ’feet’, and managed to infer the mechanisms by which they are travelling around through observation of their transit speed under different circumstances,’ says Jonathan Nitschke who researches complex molecular structures at the University of Cambridge in the UK. ’Their methods could be used to help understand how complex, multi-site binding events occur, between antibodies and antigens, for example, or between viruses and the membrane proteins of their hosts,’ he adds.