Old cinematic films that have been donated to archives such as the British Film Institute have often been stored for decades in attics, cupboards and sheds. These inappropriate storage conditions have led to fungal colonisation on films, resulting in damaged film and the production of spores. Not only is this destroying historical footage, it’s also posing a serious inhalation hazard to archivists that process and inspect the films. 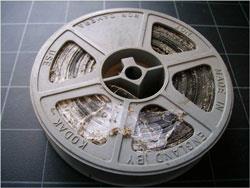 Craig Banks and his team at Manchester Metropolitan University in the UK have come up with a technique to detect mould on old film to help archivists decide how best to handle it. Using solid-phase micro-extraction coupled with gas chromatography mass spectrometry, the team detected microbial volatile organic compounds (MVOCs) on old cine film. MVOCs are only produced when mould is actively growing. The team analysed sixteen fungal isolates found on the cine film and from these, detected over 150 volatile compounds. Three of the MVOCs (1-octen-3-ol, 3-octanone and 3-octanol) were present in all the fungal isolates tested, so detecting them in particular would indicate that mould is actively growing on the film.

’We are currently patenting and working on a sensor that could be used in film cans to determine whether the mould is actively growing or not,’ says Banks. ’This will enable archivists to decide whether to handle the reels and copy the films onto new media, or store them in separate locations or containers to prevent cross-contamination of non-contaminated materials. This will also protect the health of handlers, by limiting exposure to fungal spores.’

Ken Weissman, supervisor of the film preservation laboratory at the Packard Campus, Culpeper, US, says: ’Film archivists are always concerned when they see signs of a biological growth on film, not just about how the growth may be negatively affecting the film item itself, but also about potential harmful effects to themselves. The possibility of having a detection device that can quickly and accurately characterise the potential menace of the growth is very exciting.’