MRI at the nanoscale

US scientists have demonstrated the remarkable power of magnetic resonance imaging (MRI) by adapting it to create 3D nanoscale pictures of a tobacco mosaic virus.

The team, led by Daniel Rugar at IBM’s Almaden Research Center in California, hope their nano-MRI will eventually allow researchers to analyse the three-dimensional structure of large biological molecules at atomic resolution, without damaging samples.

Rugar’s group have been developing the technique, termed magnetic resonance force microscopy (MRFM), for almost two decades. Like standard MRI, it images samples placed in a magnetic field, by picking up the radio waves nuclei emit when their spin states react (’resonate’) to an external radiofrequency pulse. But conventional MRI can only image samples down to a resolution of 40 micrometres because it relies on electric coils to detect the magnetic resonance. 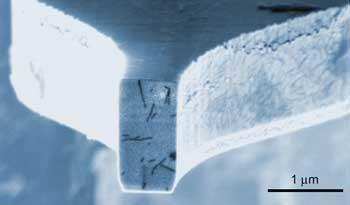 In MRFM, however, magnetic resonance is detected mechanically. The sample sits on the end of a tiny silicon cantilever to which a radio frequency magnetic field is applied via a magnetic tip. When the frequency is exactly tuned to the ’wobbling’ frequency of nuclei in the sample, they flip rapidly between spinning in the ’up’ and ’down’ directions, making the cantilever vibrate. Using a laser to detect these vibrations, Rugar’s team created proton density images of tobacco mosaic virus particles (which are about 18 nanometres across).

The researchers say that not only can they detect proton spin to achieve a resolution of just 4 nanometres, they can do it in three dimensions by scanning through slices of the sample. In this way, says Rugar, their technique goes one better than scanning tunnelling and atomic force microscopes. ’Despite how powerful these instruments are, they’re lacking the ability to see below the surface,’ says Rugar. ’The key to three dimensional imaging is to get good resolution even when you’re relatively far from your probe tip and that’s what is lacking in scanning tunnelling and atomic force microscopy.’ The researchers say they can achieve good resolution when the probe tip is as far as 50 nanometres from the sample.

Rugar’s work represents a giant leap, says Beat Meier, who studies nuclear magnetic resonance at the Swiss Federal Institute of Technology in Zurich. Indeed, the team have improved on the 90 nanometre resolution they achieved just two years ago by a factor of more than 20. And in addition, says Meier, no other technique is so generally applicable. ’Rugar’s technique will apply to most compounds,’ he says.

Rugar says there is still plenty of room for improvement, by making magnetic tips that produce more intense magnetic fields and reducing noise from small disturbances of the cantilever. 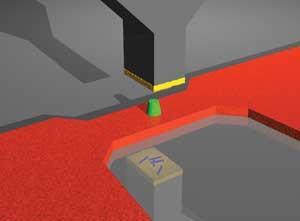 MRFM detects magnetic resonance from a sample placed on a cantilever

John Sidles, an MRFM expert at Washington University who helped to develop the basic technique in 1991, says the IBM group have made a big step towards one of the oldest dreams of scientists - atomic resolution of undenatured biological specimens. Unlike electron microscopy, MRFM does little damage to biological structures. Unfortunately, notes Sidles, there is a price to be paid. ’The imaging times from the IBM experiment are long, so the hardware will need to improve quite a bit before this becomes a routine tool for structural analysis.’

Rugar concedes that gaining enough information to build a 3D image can be tedious - it requires scanning a sample from up to 8,000 different positions for a minute at a time. But, he points out, compared to X-ray crystallography, it’s a much speedier way to determine protein structure. ’Even if it is fairly slow, you’re competing against something that’s a very time consuming process. Crystallising a protein can take anywhere from months, to years, to never - many things can’t even be crystallised.’

Another problem the team face is gaining more detailed chemical information than just proton density. Because not all nuclei are magnetic, explains Rugar, only certain elements, such as hydrogen, phosphorus and fluorine, can be imaged using MRFM. The team are therefore resorting to an old trick of NMR spectroscopists to scan for carbon. ’It’s very common for chemists to substitute carbon-13 for carbon-12, because ordinary carbon-12 is not magnetic,’ says Rugar. ’This might be a very powerful technique.’

What interests Sidles, however, is the challenge that emerging MRFM technology presents to theorists. ’It’s a challenge for theoreticians just to keep up with the advance of experiment. One thing we theorists can do is to help everybody be confident that in another few years atomic resolution will become an absolute routine tool of chemistry,’ he says.