Researchers in Germany believe they may have solved a riddle that has puzzled the gemstone industry for centuries: why diamond - the hardest known material - can be polished by bits of other diamond, and why only on certain surfaces and in particular directions. The finding could result in improved ways to polish diamond, and in particular new approaches to obtaining perfectly flat surfaces on artificial polycrystalline diamond, which could find important applications in areas such as electronics.

Diamond is typically polished using diamond grit embedded in a rapidly spinning cast iron wheel. Polishers have known for hundreds of years that some facets of the diamond appear ’softer’ and more easily polished than others. It was known that this correlated with the fact that carbon atoms are packed in a variety of ways within the crystalline lattice, some more tightly than others, but the precise mechanism of how the surface is worn down remained a mystery.

Now a team led by Lars Pastewka and Michael Moseler at the Fraunhofer Insitute for Mechanics of Materials in Freiburg have used molecular dynamics simulations to come up with a plausible explanation of how polishing works. 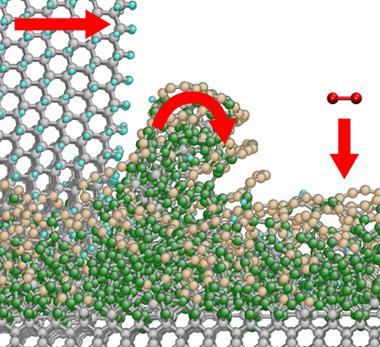 The simulations suggest that as the polishing wheel comes into contact with the diamond, the impact causes atoms to be dislodged from the surface. ’This forms an amorphous layer, which slowly creeps across the surface of the underlying crystal,’ says Moseler. Carbon atoms in this amorphous slug make bonds with those in the crystal lattice below. As the layer moves one of two things can happen to these bonds. If the underlying atom is relatively loose, it will be dragged from the crystal. If it is tightly packed, as in some planes within the lattice, it will remain in place and the bond will snap.

This accounts for some surfaces and directions being more amenable to polishing than others, says Moseler. The finding opens the way to modifying the amorphous layer to include atoms that bond more tightly to those of the underlying crystal so that even the ’hard’ faces can be polished. This could be especially important in processing synthetic diamond which is polycrystalline with many random faces - hard and soft - at the surface, making it difficult to polish to the tolerances needed in many electronic applications.

Mike Ashfold, an expert on the chemistry of diamond at the University of Bristol in the UK, says, ’Polishers have long recognised that some diamond surfaces polish more easily, and more successfully, than others; this work offers the first detailed atomistic explanation for such behaviour. The rationale is persuasive and reproduces - qualitatively at least - the relative surface/direction wear rates observed experimentally.’