Nacre-inspired composite is toughest ever ceramic

A hybrid composite inspired by the structures of bone and mother-of-pearl is the toughest ceramic-based material ever made, say US scientists. It should also be cheap and easy to produce on a large scale, and could be moulded into useful shapes for applications from aerospace engineering to tennis racquets.

Robert Ritchie and colleagues at the University of California at Berkeley report that their new material, which layers together brittle aluminium oxide plates with the polymer polymethylmethacrylate (PMMA), is as strong and resistant to fracture as some aluminium alloys. 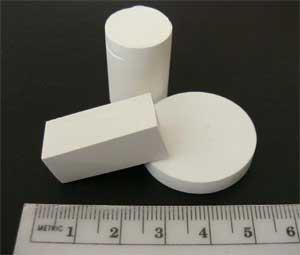 Thanks to a processing technique that organises aluminium oxide plates by freezing them in ice, the material is also easy to produce in useful bulk quantities - unlike previous layered composites that could only be made as thin films.

Natural materials such as bone, horn and the mollusc shell material nacre (mother of pearl) have impressive strength and flexibility because of the way their fragile materials are combined. The toughness of nacre, for example, arises from tiny brittle plates of calcium carbonate, only a few micrometres in size, that are coated with a thin layer of conchiolin, a soft flexible protein - cushioning them against stress and preventing cracks from forming.

Materials scientists hope to improve on these natural properties by choosing even stronger artificial starting materials, such as aluminium oxide. But creating these in the organised mother-of-pearl structure has proven very difficult: carefully depositing thin layers of ceramic and polymer works for thin films, but can’t make useful large-scale materials.

Ritchie’s team solved this problem by using a method called ’ice-templating’. Aluminium oxide plates are first suspended in water, which is then carefully frozen to produce a ceramic ’freeze-cast’ with the plates in a regular structure.

’The process enables us to control structural dimensions very carefully,’ Ritchie explains. ’By changing how fast the water freezes we can control the thickness of the ceramic layers and by adding dopants such as salt or sugar, we can change the surface roughness of the layers.’

After freeze-drying (lowering pressure and increasing temperature to sublime away water), a PMMA polymer is interpolated between the porous plates by in situ free-radical polymerisation. The result is a synthetic material that, like nacre and bone, is far tougher than a simple mixture of polymer and inorganic material.

’By following Nature’s design and making the material on a macroscopic scale, we have achieved spectacular strength and toughness properties,’ Ritchie told Chemistry World. ’We believe this is probably the toughest ceramic-based material ever made.’

Ritchie is also confident that the composites will be cheap to make, as the components (aluminium oxide, PMMA, ice, sugar and salt) are all readily available. However, it may be some time before the material finds practical applications, he notes, as new materials have to undergo rigorous testing procedures.

Despite the ceramic component, the new composite is unable to withstand high temperatures due to the polymer used. However, Ritchie says that he is already investigating variations made using metal-based compounds instead of PMMA.

Andre Studart, who researches artificial nacre-inspired materials at the Swiss Federal Institute of Technology (ETH), Zurich, is impressed by the work. ’I expect this research and other recent contributions will draw even more interest into this fascinating field of bio-inspired artificial materials,’ he says.