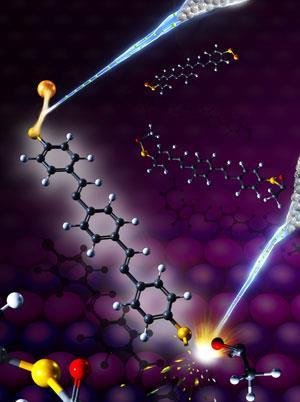 In a remarkable demonstration of the extreme limits of nanoscale engineering, researchers from the US and China have used the tip of a scanning tunnelling microscope (STM) to cleave and form selected chemical bonds on a complex molecule. The work marks another step along the road of ever-increasing control of single-molecule manipulations.

The team, led by veteran molecule manipulator Wilson Ho of the University of California, Irvine, designed a compound consisting of a chain of three aromatic rings with a tail at each end, comprising an acetyl group attached to the ring system by a sulfur. This molecule was then adsorbed to a nickel-aluminium surface and the tip of the STM was positioned over one of the ‘tail ends’ of the molecule. Electrons from the tip were injected into the sulfur–acetyl bond. At a particular threshold energy of the electrons, the bond snaps. ‘This occurs with surprisingly high efficiency,’ Ho says, with the energy being localised at the bond and with relatively little dissipation across the rest of the molecule.

Similarly, the bond between the sulfur and the aromatic ring can also be selectively cleaved at a given end of the molecule. By this method the researchers sequentially broke all four bonds, leaving the aromatic chain remaining. In a second series of experiments the team cleaved the acetyl groups, exposing the sulfurs. They deposited gold atoms onto the surface and gradually nudged them closer to the sulfurs with the STM tip. ‘Sometimes a bond forms, but sometimes it doesn’t,’ Ho says. By ‘energising’ the sulfur and the gold with electrons from the STM, a much higher rate of bond formation was achieved. ‘By exciting the gold and the sulfur, we can form a bond through a kind of “nano-welding” process,’ says Ho. The microscope was also able to image the patterns of electronic distribution as the various bonds formed and broke.

Other experts in the field recognise the significance of the new work. Geoff Thornton, of UCL and the London Centre for Nanotechnology, UK, says: ‘It's a lovely piece of work.’ Thornton adds: ‘The modification of the molecular electronic structure on attaching a gold atom at both ends of the molecule is also fascinating, but I was left wondering what role the alloy substrate might play in this process.’

‘Ho’s team shows that the techniques that work on small and well-studied molecules also work beautifully on large extended chemical structures,’ says Peter Sloan of the University of Bath, UK. ‘Atomically engineered molecules probably won’t be appearing be appearing in the high-street soon, but these researchers have taken a small but important step.’