Toads far from happy about the deal

Most animals will steer well clear of poisonous toads belonging to the Bufonidae family. But not so a species of Asian snake, which happily eats them and recycles the toxins to ward off predators of its own.

Accumulating toxic compounds from the diet is a trick that can be pulled off by several invertebrates and a few frogs. But it’s very rare for vertebrates to sequester toxins from their food, especially from vertebrate prey, says Deborah Hutchinson of the Old Dominion University in Norfolk, Virginia, US.

Now she and her colleagues have demonstrated that the Japanese colubrid snake Rhabdophis tigrinus is getting its bufadienolides by snaffling up toads. For most would-be predators these are dangerous compounds, bringing the heart to a sudden halt by inhibiting the membrane-bound sodium/potassium pump.

Hutchinson and her colleagues investigated how these snakes get their poison from several angles. First, they found that snakes living on the toad-free Japanese island of Kinkazan lacked bufadienolides completely. On toad-rich Ishima, by contrast, proton NMR of fluid from glands on the snakes’ neck revealed the presence of large quantities of these chemicals.

Then they reared two groups of baby snakes under identical conditions, except that one had plenty of toads to eat and the other had none. Control snakes given a toad-free diet did not accumulate the poison. But juvenile snakes feeding on toads did. Even Kinkazan snakes could sequester bufadienolides, report Hutchinson and her colleagues in Proceedings of the National Academy of Sciences. 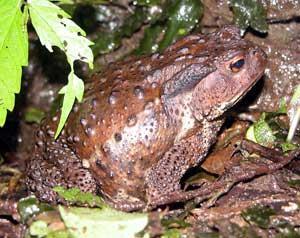 Finally, they explored the chemical structure of these compounds in both toads and snakes. The most common toad toxins are characterised by a suberylarginine side chain but this is absent in snakes, they note. Either the snakes are specifically taking up bufadienolides without this side-chain or more likely they are cleaving off the side-chain following uptake, says Hutchinson. In addition, snake bufadienolides appear to be more hydroxylated than their amphibian analogues. ’It could be that hydroxylation assists with the uptake or the long-term storage of these compounds,’ she suggests.

There’s nothing difficult about these chemical reactions, says Fanie Van Heerden, professor of chemistry at the University of KwaZulu-Natal in Pietermaritzburg, South Africa. ’The similarity of the structures of the bufadienolides isolated from the snakes and the toads also supports the idea that the snakes obtain the compounds from the toads,’ she says.

This research raises several interesting questions, perhaps most notably how the snakes can go about eating poisonous toads with apparent impunity. This isn’t known,admits Hutchinson. But one possibility is that the snake has a mutated sodium/potassium pump to which the toad’s poisons cannot bind, she says.