Nanodiamond aerogel hammered out on anvil

US researchers have transformed a common amorphous aerogel into a nanodiamond aerogel simply by applying pressure and heat in the presence of neon. They hope their technique could be used to create a new range of crystalline aerogels. 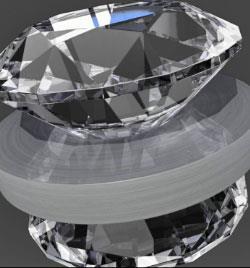 A diamond aerogel has been hammered out of a microscopic anvil

Aerogels are low density materials with a sponge-like structure, derived by

replacing the liquid in a gel with a gas. ’People have made huge numbers of amorphous aerogel materials but often the aerogel doesn’t have good electrical conductivity or optical properties because of its internal structure,’ says Peter Pauzauskie, who worked on the research at the Lawrence Livermore National Laboratory. ’The question is, now that we have these aerogels, can we preserve their ultra low density and mechanical strength, but change the phase from amorphous carbon to diamond?’

The team made the structure using a diamond anvil cell to squeeze an amorphous carbon aerogel between two diamond surfaces, at pressures of more than 20GPa. They drove the transition forward by laser-heating the cell, resulting in temperatures above 1200K. ’We used high temperature and high pressure to, in effect, do what the earth does deep down at geological depths when carbon spontaneously converts into diamond,’ says Pauzauskie.

The challenge was making sure the delicate aerogel didn’t collapse. To overcome this, the team filled the pores of the aerogel with supercritical neon gas. At pressures greater than 5GPa the neon changed into a solid, supporting the aerogel’s structure.

The diamond anvil cell can only produce micron-sized structures - around the width of a human hair. But even with such small amounts of material, Pauzauskie says there is potential for use of the nanodiamond as a sensor in extreme conditions, thanks to its stable structure.

Although the team have shown that transforming an aerogel from an amorphous to crystalline structure is possible, they have not yet determined the minimum temperature and pressure needed to do this. ’If we can answer that question it may be possible to use other manufacturing techniques that can increase the amount of material we can make,’ says Pauzauskie. Ultimately, the team hopes that their technique could be applied to other aerogel structures.

’It’s certainly very interesting research.’ says Andrea Ferrari an expert on carbon nanostructures at the University of Cambridge, UK. ’What’s especially innovative is that they’ve managed to protect the structure of the aerogel. It opens up a new way of producing these materials but is still very much at the beginning.’