UK chemists have overcome the shortcomings of a promising hydrogen storage material by simply converting it into nanofibres.

The lithium nitride fibres, created by Duncan Gregory and colleagues at the University of Glasgow, UK, can store and release hydrogen in minutes - rather than the hours required by bulk lithium nitride. And they do it without compromising on the amount of hydrogen that can be stuffed into the material - the key advantage of the lithium nitride system.

Gregory presented his work at an RSC conference, ’Future Energy - Chemical Solutions’, held in Nottingham, UK. As he explained, lithium nitride (Li3N) has been earmarked as an excellent hydrogen absorber since 2002, when Ping Chen of the National University of Singapore and colleagues discovered that hydrogen readily binds to nitrogen atoms in the structure, displacing lithium, to form first the imide Li2NH, then the amide LiNH2. Lithium hydride (LiH) is kicked out during the reaction. 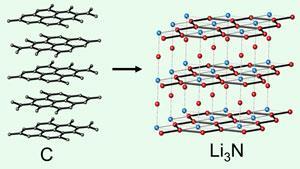 By cycling from imide to amide and back again - storing and releasing hydrogen many times - other researchers have shown that the system can, in practice, store about 6 per cent of its own weight in hydrogen. That is not far short of targets demanded by the US Department of Energy to show that a solid material can reversibly store enough hydrogen to keep conventional cars running for hundreds of miles.

But bulk lithium nitride has snags: the temperatures required for the desorption, at 260?C, are rather high for practical purposes; and the absorption/desorption cycle is painfully slow (around 5 hours).

Gregory’s Li3N fibres, which are 50-400 nm in diameter, absorb hydrogen much faster. The idea came from the similarity of Li3N’s sheet-like structure to graphite, which forms carbon nanotubes. Thanks to their large surface area, carbon nanotubes have been tried before as fast hydrogen absorbers, but the results were poor: only 1 per cent hydrogen by weight can be accommodated because the nanotubes only form weak, physisorbed attractions to the hydrogen. But lithium nitride forms strong chemical bonds, so Gergory’s fibres can pack in much more hydrogen.

"It seems we combine the benefits of slow but high capacity chemical storage of hydrogen in bulk Li3N, with a fast physisorption-mediated mechanism in nanofibres" - Duncan Gregory

’It seems we combine the benefits of slow but high capacity chemical storage of hydrogen in bulk Li3N, with a fast physisorption-mediated mechanism in nanofibres,’ said Gregory.

Paul Anderson, who has developed related lithium-boron nitride hydrogen storage systems at the University of Birmingham, UK, said it was impressive that Gregory could alter the storage kinetics by changing the form of the starting material. But he added, ’For a viable store, a question for any nanomaterial is whether you can make enough of it.’

Gregory won’t divulge how he makes the nanofibres; his work is yet to be published but has been patented in the US. He suggested that as Li3N is a good conductor of lithium ions, the strong fibres might also make promising battery materials.