Membranes with tunable pores could be key components in future batteries

Scientists in China have found that nanofiltration membranes could enhance the efficiency of vanadium redox flow batteries (VRBs) making them a more viable tool for large-scale energy storage.

Xianfeng Li from the Chinese Academy of Sciences in Dalian and his team made the membranes, which separate two components in the batteries, from polyacrylonitrile. Pores in the membrane can be adjusted, allowing scientists to have more control over the ions passing from one side of the battery to the other during charge-discharge cycles, improving the battery’s performance. 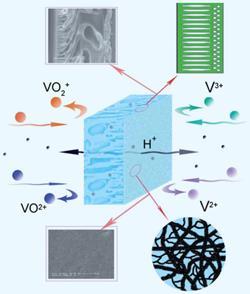 The nanofiltration membrane lets protons through but not vanadium ions

The random and intermittent nature of renewable wind and solar energy sources can limit the power output quality, says Li, who adds that ’energy storage is the key to solving this problem.’ VRBs can store a significant amount of energy. In these batteries, two electrolyte tanks, containing species of vanadium in different valance states, are separated by an ion exchange membrane. When the battery is charged, the vanadium ions are oxidised or reduced, converting chemical energy into electrical energy.

Ion exchange membranes should prevent the crossover of vanadium ions, while allowing protons to pass through. But the ones most commonly used - perfluorinated polymers such as Nafion - let vanadium ions through and are expensive to buy, despite showing high proton conductivity and chemical stability. Other low-cost membranes need additional ion-exchange groups, which lower their stability. The difficulty in finding a suitable membrane has limited the commercialisation of VRBs, Li explains.

The team adjusted the polyacrylonitrile membrane’s pore size distribution by varying the polymer concentration. They measured their membrane’s selectivity between vanadium ions and protons by placing the membrane in a cell with vanadyl sulfate in sulfuric acid on one side and deionised water on the other. They collected samples from the right side over time and analysed them with a UV-visible spectrometer and a pH meter. They found that the membrane showed increased selectivity for protons over vanadium with a smaller pore size distribution. They observed that the performance was comparable to Nafion, but at a lower cost.

John Varcoe, who develops systems for clean and sustainable energy generation at the University of Surrey, UK, says that using nanofiltration membranes in redox flow batteries is ’an exciting new development in the field’. ’The simplicity of the system does not lead to a sacrifice in performance and efficiency,’ he adds, but he points out that further stability tests are needed.