Nanomaterial dust no worse than the rest

A team of researchers in Germany has brought some good news to the debate on nano-material safety. The team took four materials containing nanoparticles or nanotubes and subjected them to high speed sanding, gentle abrasion and UV radiation, and found that the resulting dust was no finer than that from conventional materials. What’s more, rats exposed to the fine dust fared no worse whether the material contained nano-components or not.

With an eye on likely consumer exposure, Wendel Wohlleben and his colleagues at German chemical group BASF, in Ludwigshafen, studied two thermoplastic materials - polyoxymethylene (POM) and polyamide - as well as two cements infused with different nanostructures. 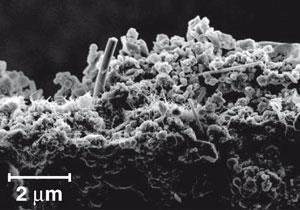 The researchers did not find significant release of nano-components into the air as a result of sanding. They collected the dust and measured the particle sizes and chemical identities using microscopy, spectroscopy, laser diffraction, fractionation by centrifuge and filtration. In all cases, the nanomaterial powders were not significantly smaller than the control powders.

By rolling wheels over the materials, the researchers simulated the gentler abrasions of everyday wear and tear. As with the sanding, the sizes of particles released through this treatment appear to be independent of the material’s nano-component content.

Andrew Maynard, professor of environmental health sciences at the University of Michigan, US, says these results were expected as the nano-components are very tightly bound to the plastic and cement. But he adds: ’We cannot be complacent and assume that there is no release or subsequent risk here - there need to be studies, and this is one that helps inch the state of knowledge forward.’

A dose of UV light equivalent to nine months outdoors degraded the POM and exposed the network of carbon nanotubes, an effect which Wohlleben says is known. In contrast, the researchers saw no differences in UV weathering between the nano-engineered and plain versions of the polyamide or either cement.

The team then studied the biological effects of the powders, using only particles small enough for absorption by lung tissue. They injected suspensions of powder into the lungs of 48 rats. Three days after the dose, and again after three weeks, the researchers examined the rats for damage to tissues or DNA. None of the rats experienced general or organ targeted toxicity or mutagenic effects. Although the powders caused some inflammation in the lungs of the rats, the nano-materials were no more detrimental than their conventional counterparts.

Wohlleben calls the rat study preliminary as it was limited by the amount of powder available, but the results suggest that the nano-components do not increase the hazards of inhaling the material. ’The statistics will be improved in further studies, but for the first time, we have experimentally determined all elements of a risk assessment of nano-composites,’ he says.