Proteins cling to co-polymer thanks to electrostatic interactions 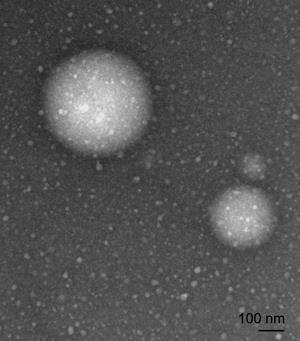 The nanoparticles can carry their own weight in proteins

Interactions between conventional drug delivery systems, such as hydrogel nanaoparticles, and leftover solvents from the fabrication process can damage protein drugs. To create a successful drug delivery vehicle that can deliver a drug protein unharmed, they need to be biocompatible, biodegradable and eco-friendly. The Boston scientists have achieved all of the above by relying on one property of poly-electrolytes: static electricity.

The scientists mixed poly(lactide-co-glycolic acid) (PLGA) and L-arginine-based polycations (PC) to produce a hydrophilic co-polymer, which then assemble into PLGA–PC nanoparticles, ‘just like fluff attaching to clothes or gloves in winter’, author Jun Wu at Brigham Hospital explains. The small size of the nanoparticle (20–80nm) and the poly-cationic moieties drives proteins, including insulin and TNF-alpha, to cling tightly to the nanoparticle core in just water, without any organic solvent present.

‘This protein–nanoparticle complex could be looked at as a spherical chocolate with some nuts inside,’ says Wu. The proteins constitute the chocolate, and the nanoparticles the nuts.

Wu hopes that ‘this platform could be used as a protein bomb to destroy the cancers or any other diseased parts in the human body’. As they have used US Food and Drug Administration approved biocompatible raw materials such as amino acids, fatty diacids and diols to develop the nanoparticles, getting approval for clinical trials should be easier too.

Wu says that their end goal is to create nanocarriers loaded with nucleic acids or other drugs besides proteins, avoiding the use of organic solvents. He hopes that this ‘green approach’ could help ‘patients make nanocarriers by themselves by simply mixing the formulations following a very simple protocol’.

However there are still challenges. ‘The system needs to be further optimised before going to animal studies [or] clinical trials’, says Wu. He adds that the group has plans to conduct multiple animal studies for diabetes, cancers and cardiovascular diseases.

Sangyong Jon at the Korea Advanced Institute of Science and Technology, South Korea says that loading the carriers with such a large amount of protein is exceptional. However, he warns that the PLGA copolymer might have some toxicity problems and this should be investigated.

‘We are aiming to have some optimised systems for clinical trial within three to five years if the animal study results are promising,’ says Wu.