US researchers have developed a nanotechnological assay for detecting programmed cell death. The technique is effective in cell cultures, they report, and might eventually be used in humans. 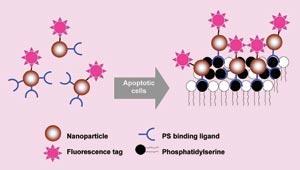 Programmed cell death, or apoptosis, is essential for the elimination of unwanted cells in the body. Failures can lead to the build up of these cells, such as the uncontrolled replication of tumour cells. Some cancer therapies are aimed at inducing apoptosis. Developing methods to monitor apoptosis in the body could be useful to test the efficacy of apoptotic drugs.

The standard method for monitoring apoptosis relies on the protein annexin V, which binds to the surface of apoptotic cells. The cells can be detected by tagging the protein with a fluorescent or radioactive label.

During apoptosis, changes occur in the phospholipid composition of the cell membrane. In particular, phosphatidylserine translocates from the inner surface of the lipid bilayer that comprises the cell membrane, to the outer surface. The phosphate moiety is then susceptible to chelation by zinc compounds.

’We took iron-oxide nanoparticles and attached zinc chelators to their surface,’ Tung told Chemistry World. ’In a cell-free non-biological assay, the phosphate binding ligands could be pulled out of an aqueous phase and moved into an organic phase by phosphatidylserine. This showed that they had the required affinity.’ Tung’s team tested the system in a biological assay, having induced apoptosis in cultured cells. ’When we co-incubated the nanoparticles with the cells, they bound to the apoptotic cells,’ said Tung.

Tung’s team plans to develop the system further to investigate the feasibility of using the nanoparticles as a sensor to track apoptosis in the body. ’However,’ he cautioned, ’the work is still at an early stage.’ Simon Hadlington