The self-assembly of metal nanoparticles at fluid interfaces has been successfully demonstrated by German researchers.

The self-assembly of metal nanoparticles at fluid interfaces has been successfully demonstrated by German researchers. The thin film of nanoparticles is dynamic, resembling the type of interfaces found in biological systems, and may find applications in biomimetic nanodevices.

Dayang Wang and colleagues at the Max Planck Institute of Colloids and Interfaces have used their knowledge of surfactant behaviour to show that nanoparticles of different size and chemical composition assemble into close packed arrays at a water-oil interface. They succeeded in forming thin films of hydrophobic and hydrophilic nanoparticles at the interface. The functionalised nanoparticles were shown to stabilise emulsions and form novel microcapsules or nanoparticlosomes. 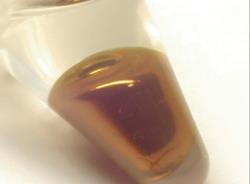 The organisation of the functionalised nanoparticles is not governed by their size but is dependent on the contact angle, which is determined by the nature of the terminal groups of the capping ligands and must be 90?.

This self-organisation of nanoparticles represents a development towards behaviour similar to surfactant assembly, and according to Wang is a step closer to the ’fabrication of nanodevices with biomimetic functions, such as self-healing and self replication’.