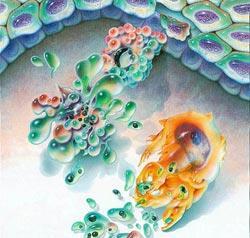 Apoptosis is an essential process in the development and maintenance of all multi-cellular organisms. About 50-70 billion cells are killed each day by apoptosis in the average human adult. But when the process goes wrong, when cells fail to die, for example, then diseases such as cancer can result.

Researchers led by Ick Chan Kwon from the Korea Institute of Science and Technology, Seoul, developed a probe for detecting two cysteine proteases (caspases) that play an integral role in the apoptosis process. Caspases effectively take cells to bits. The researchers linked the specific amino acid sequence that is cleaved by the caspases to a fluorescent compound, and then attached this to biocompatible polymer nanoparticles made of poly(ethyleneimine).

Chan Kwon’s team showed that these nanoparticles entered healthy cells without damaging them, and did not fluoresce at first. The nanoparticles only started fluorescing when the researchers instigated apoptosis by treating the cells with tumour necrosis factor. At this point the nanoparticles interacted with the two specific caspases.

’This is an elegant design of nanoparticles for imaging applications,’ said Ching Tung, associate professor of chemistry at Harvard Medical School, who recently developed an alternative apoptosis probe (see link below). Tung suggested that, by using different amino acid sequences, this imaging method could be adapted to detect the presence of many other proteases.