Nanoscale microphone based on a single molecule 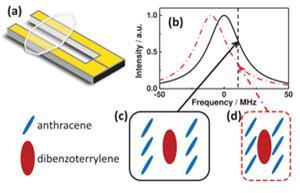 Vibrations from the tuning fork cause the anthracene crystal to deform, which shifts the dibenzoterrylene molecule's ZPL

Researchers in the Netherlands have created the world’s tiniest microphone, in which the acoustic detector is a single molecule. The nanomicrophone could one day be used to eavesdrop on acoustic vibrations of increasingly small nanoscale objects, the researchers suggest, as a way to probe the mysterious transition between classical and quantum mechanics.

To create the microphone, a group led by Michel Orrit at the University of Leiden took a crystal of anthracene doped with molecules of the organic dye dibenzoterrylene (DBT). This was mounted on a small quartz tuning fork to act as the source of vibrations and the system cooled to a few degrees above absolute zero.

Laser light is directed onto a small portion of the crystal. Under these conditions, a given molecule of DBT can absorb a photon of the incoming light and go from its ground state to an excited state in a single quantum transition, with no accompanying thermal or vibrational motion. This exceedingly narrow region of the absorption spectrum is termed the zero phonon line, or ZPL. Because each molecule of DBT in the sample is effectively sitting in its own unique environment, in terms of its orientation and relation to surrounding atomic structures, it will have a unique ZPL. ‘We tune the laser until we detect a strong fluorescence signal, which tells us that just one molecule is excited and fluoresces,’ says Orrit.

When the quartz tuning fork is induced to oscillate at tiny amplitudes, this distorts the anthracene crystal matrix, which in turn changes the distance between the DBT molecule and its nearest anthracene neighbour, resulting in a measurable shift of the ZPL.

Orrit says that in principle it should be possible to couple the anthracene-DBT system to smaller and smaller acoustic sources, for example carbon nanotubes, with the potential of detecting the transition point between classical and quantum mechanics. ‘That is the most exciting possible application for me and that would be the dream,’ Orrit says. ‘Let’s hope it comes true soon.’

Commenting on the work, William Moerner, a pioneer of single molecule spectroscopy at Stanford University in the US, says: ‘This is a beautiful demonstration of the exquisite sensitivity of single molecules at low temperature to perturbations in their local environment. Here, Orrit et al. have coupled the tiny crystal containing the molecule to a very small resonator, which shows the power of the single molecule as a nanoscale strain field detector.’