US chemists have designed and built self-assembling 3D nanostructures using transfer RNA (tRNA) as a building block. They hope their structures could find uses in areas such as drug delivery.

Luc Jaeger from the University of California at Santa Barbara and his team used the core structure of tRNA to build distorted cube-shaped nanocages. ’We chose tRNA because it’s a branched structure, shaped like a corner,’ says fellow researcher Cody Geary.

The tRNA the team used comprises of three arms - two of which form an L shape and a third which joins the other two at the corner and extends so that together the arms form a corner. As each arm has a well-defined direction the team were able to design an octahedron made of eight separate tRNA units, each forming one corner of the nanostructure.

’Previously we had built squares using [the L-shaped arms of] four monomers which assemble through an interaction called a kissing loop,’ says Geary. The next step was to make a 3D object. To do this the team engineered complementary sequences onto the 3’ tails of the free third arms, allowing them to join two squares together and form an octahedron. The whole assembly occurs in a stepwise fashion, forming squares, then octahedrons, in just one pot. 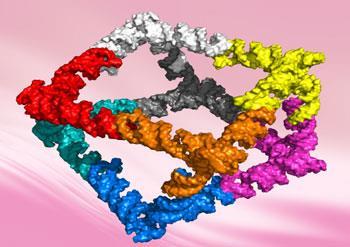 The team visualised their object with atomic force microscopy and cryo-electron microscopy. As expected, the final structure took the shape of a distorted cube, or square antiprism, due to the third arm varying its orientation slightly.

For example, the team were able to either encapsulate the protein streptavidin inside the structure or attach it to the outside, depending on whereabouts on the RNA structure they attached the ligand biotin.

’In terms of making highly controlled low symmetry and highly functionalisable nano-objects this looks like a really promising and interesting step forward,’ says Jonathan Steed, who works on supramolecular chemistry at the University of Durham, UK. ’These are remarkable structures for their scale and the fact that they can be designed so carefully and assembled so cleanly is very beautiful and very impressive.’

The team now hopes to design and build even more complex structures by using RNA molecules with different architectures. ’There are quite a variety of RNA motifs in nature so when you consider how much variety there is out there we have a very big toolkit to work with,’ says Geary.