Nanoscience brings artworks back to life

Italian chemists have developed a new polymer-based cleaning system to remove old residues from the surface of valuable works of art. The gentle gel has already been used to brighten up 15th century wall paintings and gilded frames darkened by aged varnish or polymeric coatings.

During the 1960s and 70s, restorers treated artwork with a polymer coating to protect it from damage. But over the years, the polymers have oxidised and become yellow or darkened, particularly in environments such as tombs or cathedrals. In some cases, this process has been quickened by the metals used in ancient paints.

’The problem is that many paintings are porous, so they will absorb any conventional solvents, which can cause damage,’ says Piero Baglioni, who led the research at the University of Florence, Italy. ’Our solution is a micro-emulsion that is designed to dissolve only the organic molecules on the surface.’

SEM images before and after polymer removal. The aged polymer coating makes the surface ’smooth’, with very low roughness compared to the cleaned surface

Baglioni’s cleaner is a transparent gel that can be dabbed on - allowing restorers to visually monitor the cleaning and minimise absorption into the material. The cleaner is made from a small amount of the volatile solvent p-xylene dissolved in water and thickened into a gel with hydroxyethylcellulose. This ’oil-in-water’ gel has a microstructure of tiny droplets of oil-coated water trapped in the cellulose chains, and these will dissolve organic polymers such as poly vinyl acetate.

So far, Baglioni’s team have treated 15th century wall paintings at the Santa Maria della Scala Sacristy in Siena, Italy, and an 18th century gilded frame, dramatically improving their colour. Next, the team are planning to work on wall paintings from Cholula, Mexico and Israel. 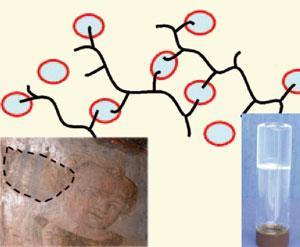 Microemulsion nanodroplets (blue and red) held within the polymer network (black) are a low-impact way to clean painted and gilded surfaces. Right: mixture of the microemulsion and polymer

’The gels described here are characterised very carefully, so the possibility to understand the details about how the cleaning action occurs is enhanced,’ says Richard Weiss, who works on art restoration projects at Georgetown University in Washington D.C., US.

’It will be interesting to see how general this approach will be. It may be a very broadly applicable useful tool in the kit of conservators,’ Weiss adds, but notes that a remaining challenge is cleaning oil paintings. These are often made with layer upon layer of organic-based paint - and there is the danger that important fixing molecules could be dissolved, leading to the paint flaking away.

’For cleaning organic oil paintings, we need to use a micro-emulsion that is highly specific to only the organic polymers,’ Baglioni told Chemistry World. ’This is something we have been working on for a while, and we plan publish our results later this year.’