Nanospikes stick out from the crowd

Tiny ’nanospikes’ cut from surfaces with a laser will drastically improve performance in photovoltaic cells, biomaterials and even computer processors, say US researchers.

Mool Gupta, at the University of Virginia, US, and his team have invented a way of texturing surfaces with densely-packed spikes, so as to increase the available surface area. The spikes have tip diameters as small as 10nm. Gupta’s team hope to spin out a company to provide their ’nanotexturing’ service, and licence the technology to larger firms.

The technique could have many applications, Gupta explained. Nanotextured heat sinks on computer processors would dissipate heat more rapidly and could run at higher voltages, making them faster. Photovoltaic cells with nanospikes trap more photons as they bounce between the spikes, making them more efficient. ’Light reflects sideways off the spikes, and [to the naked eye] the area looks totally black’, Gupta told Chemistry World.

Another prospective use for the technology is in joint replacement. Gupta’s team is working with Cato Laurencin at the University of Virginia’s Orthopaedic Surgery Department to see if nanotexturing metals such as titanium used in implants helps bone cells grow more quickly on the metal. 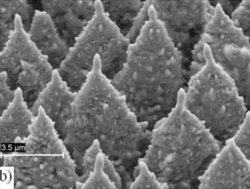 Source: © Gupta, University of Virginia, US

The tips of the nanospikes can be as small as 10nm, dramatically increasing surface area

Clive Weatherby, CEO of Whitfield Solar, a spin-out of the University of Reading, said the method might be ’universally applicable’ to photovoltaic technology. ’Any incremental change [to the active photovoltaic cell] which improves efficiency will give a marked cost reduction,’ he told Chemistry World.

To create the spikes, the scientists shoot highly focused femtosecond laser pulses which melt the surface and raise bubbles of liquid metal. The short laser pulse (120fs) means bubbles freeze again very quickly from the outside in, and the liquid in their centres is pushed up into a spike shape while solidifying, the scientists believe.

Chemists contacted by Chemistry World were sceptical about the originality of the work, but Gupta defended the process’s grounds for patent: ’The combination of the surface, the environment and the ultrafast laser pulses is unique.’ The CEO of the university’s Patent Foundation, Robert MacWright, also told Chemistry World: ’We believe the patterning processes offered by Professor Gupta are unique and patentable.’

Gupta told Chemistry World that the discovery shows that ’when you look closely at something that appears mundane, you can find some exciting things.’