Nanosprings have been made by encasing gold nanowires inside shrinking polymers

Squeezing gold nanowires inside a polymer case causes them to coil up into tiny springs, researchers in Singapore have found. These nanosprings store energy during the coiling process, and release it again when straightened back out.

Nanomachines may still be the stuff of science-fiction, but the miniscule components they would require are getting ever closer. Scientists have already made nanosized springs but it hasn’t been easy to make them out of single metal wires, until now. Metallic nanosprings, analogous to the macrosized springs we use extensively in everyday life, are desirable due to metal’s flexibility and resilience. 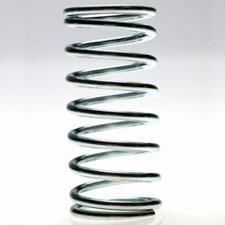 Most nanosprings made so far have been naturally coiled and required energy to be straightened out. But Hongyu Chen and his team at Nanyang Technological University and the National University of Singapore, have made springs that instead release energy when uncoiled.

To make the springs, the team encapsulated gold nanowires in a polymer container called a micelle. The solvent around the micelle was then changed causing it to shrink in size. Each micelle was found to contain a single coil of five to 10 loops, and the team believe that the micelle shrinkage triggered the coiling up of the wire.  When the polymer is removed - or the micelle is allowed to swell again in an appropriate solvent - the springs straighten back out, releasing energy.

’We wanted to make the wires fold into random coils by crumpling them in a restricted volume and we were surprised when we found that the springs were ordered,’ explains Chen.

Christoph Weder, professor of polymer chemistry at the Adolphe Merkle Institute in Fribourg, Switzerland, thinks that the concept is an exciting one. ’The wire is only indirectly involved with the self-assembly process, which makes this an interesting concept - they are not trying to manipulate the wire growth directly but exploit the assembly of the polymer,’ he says. Weder sees the method being used to induce coiling in other materials too.

Chen believes that multiple component systems are the way forward for nanotechnology. ’With this combination of two components we have been able to achieve something that cannot be achieved with any of the single components,’ he says. Chen hopes that this is another ’tree in the forest’ of nanofabrication.