A protein coupled with a carbon nanotube has provided a previously unavailable direct biological-to-electronic interface, which its developers hope could lead to brain-controlled prosthetic devices.

A group of scientists based in California, US, produced the interface at the Lawrence Livermore National Laboratory by covering a nanotube in a lipid bilayer that contains ion transporter proteins. ’The end goal would be to use this kind of system to make a synthetic synaptic junction to transmit signals directly into muscles and tissues,’ says project leader Aleksandr Noy of the University of California, Merced.

While carbon nanotubes are the right size to integrate with biological molecules, they are usually very hostile to them. Active proteins, like the sodium/potassium ATPase ’biological machine’ integrated in Noy’s transistor, have therefore not previously been used to control nanoelectronic devices. ’If you try to adsorb proteins on the nanotube, they most likely will denature and lose functionality,’ Noy explains. ’We came up with the trick of wrapping the nanotube in a lipid bilayer to solve this.’ 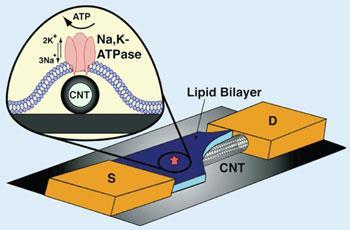 The transistor uses a single carbon nanotube, covered by a lipid bilayer that incorporates a sodium/potassium-ATPase ion pump, to connect source (S) and drain (D) electrodes

ATPase is present in almost all cells found in higher organisms, where it shuttles ions across plasma membranes to balance out osmotic pressure. It moves three sodium ions across in one direction, and two potassium ions back the other way, fuelled by the energy-currency molecule adenosine triphosphate (ATP). In the transistor, this behaviour is used to control the concentration of ions between the lipid bilayer and the nanotube. ’The extra ions change the electric field around the nanotube,’ Noy explains. As the nanotube is a semiconductor, manipulating the field controls the conductivity and hence the electronic behaviour of the transistor.

’Learning how to exploit ATP is essential to miniaturise biomedical devices,’ notes Viola Vogel, who investigates biological nanosystems at ETH Zurich. ’A dream of bioengineers is to power medical implants with biological fuel rather than batteries.’ Vogel sees the nanotube-protein device as an ’intriguing step’ towards this.

Noy’s team, which includes researchers from the University of California at Berkeley, Davis and Los Angeles, will now continue to develop their technology as a bio-electronic interfacing platform. ’This is a way to wire-up biological molecules into electronic circuits, and there is a nearly endless number of biomolecules that I could use,’ Noy said. ’To use a toy analogy, the number of the Lego set pieces available to us is staggering.’