Scientists provide proof that nanotubes rotate as they grow

French and US researchers have produced the first video evidence that carbon nanotubes turn as they grow. Their films, showing atoms being added in a regular pattern at the growing tip of a nanotube, like bricks to a round tower, support the so-called theoretical screw-dislocation-like (SDL) model of carbon nanotube growth.

Most groups trying to observe how nanotubes grow currently use transmission electron microscopy (TEM) methods. But Stephen Purcell and colleagues at the University of Lyon 1 in France and Rice University, Texas, US, took a different approach - they used field emission microscopy (FEM) and were surprised to see the caps of the nanotubes rotating as they grew. ’Suddenly the damn thing started to turn!’ recalls Purcell. ’Now we didn’t expect that - nobody expected that. Immediately the conclusion was that this was the driving mechanism in some growths.’ 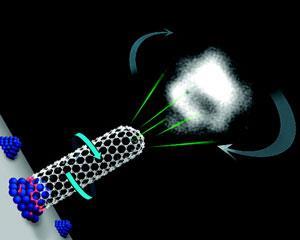 The team observed carbon nanotubes rotating as they grew

In one video, they followed a nanotube making 180 turns. And when Purcell’s team slowed down the videos, they also saw that the tubes were making little jumps. On average, there were 24 jumps per rotation. They quickly realised that each jump must signify a carbon dimer being inserted - according to their calculations, if monomers were being added, the average size of a nanotube would be too small to fit with most previous observations.

’It’s amazing when you understand that you actually just saw an atom being grown on to the nanotube,’ says Purcell. ’Every time it made a little jump, you saw what was probably a dimer being added. That’s very pretty physics.’

In theory, adding a dimer is energetically more favourable than adding a monomer, but until now, no one had been able to show how it happens in practice. ’These results strongly support the proposed spiral, dimer-by-dimer mechanism for carbon nanotube growth and the observed rotation of the nanotubes adds surprising and fascinating detail,’ says Eric Drexler, nanotechnologist and chief technical adviser to molecular engineering software firm, Nanorex.

Understanding how nanotubes grow is important because it could help researchers gain control over the growth process itself, for applications such as nanotube transistors. Purcell is quick to point out that the SDL mechanism won’t be true for all nanotubes in all conditions - his own nanotubes are single-walled tubes grown by chemical vapour deposition - but he thinks understanding what he sees as the ’simplest case’ could ultimately lead to absolute control at the atomic scale. Of course, he notes, this also depends on having absolute control of the catalysts.

’This improved understanding of carbon nanotube growth may lead to improved catalysts, and looking to the future, it opens the door to speculation about potential means for directing the growth of carbon nanotubes and graphene to form specified, atomically precise structures,’ says Drexler.