A new carbon-based hybrid material is set to make an impact on the microelectronics industry. Christened ’nanobuds’, the material consists of single-walled carbon nanotubes with football-shaped fullerenes stuck on their outer surfaces, like Brussels sprouts on a stalk. This hybrid concoction combines the qualities of both robust nanotubes and reactive fullerenes to give budded carbon branches suited to a host of electronic applications, with superior room-temperature electron emission properties to carbon nanotubes alone.

Discovered by a Finnish-based international team of scientists led by Albert Nasibulin and Esko Kauppinen from Helsinki’s University of Technology, nanobuds are produced in one step by the controlled decomposition of carbon monoxide on the surfaces of iron particles.

The researchers first thought they had produced single-walled carbon nanotubes with an amorphous coating. Once they cranked up the transmission electron microscopy magnification however, they soon realised much of the coating really consisted of covalently-bound C42, C60, and even some C20 fullerenes: the last being the smallest dodecahedron of carbon atoms possible. 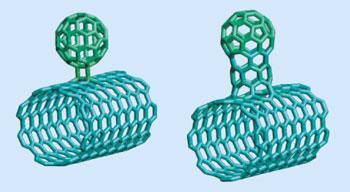 NanoBuds: fullerene-SWNT hybrid structures, reminiscent of buds on a branch

The fullerene buds are produced by cycloaddition reactions with the carbon nanotube. ’This leads to a kind of conveyor belt process where the buds move away from the iron catalyst particles as new nanotube side-walls and buds grow,’ says co-author David Brown. The number of fullerenes on each nanotube is determined by trace amounts of water and carbon dioxide in the original carbon monoxide.

The electrical properties of nanobuds combine those of nanotubes and fullerenes: the former have excellent conductivity and inertness, while the latter contribute chemical reactivity and, in particular, good electron emission properties - which make nanobuds particularly useful in microelectronics applications using an effect called cold electron field emission.

Here, quantum tunnelling allows room temperature electrons to be emitted from a solid through its surface potential energy barrier, when a large enough external electric field is present. The shape of the surface drastically affects the electron emission current: the greater the curvature, the higher the current and the better the material behaves as a cathode.