By tightly squeezing light-switching chemical groups along carbon nanotubes, researchers in the US have moved closer to flexibly storing solar energy for later use.1 The team showed that nanotubes carrying a high density of azobenzene chromophores bind closely together, the chromophores assembling between each other like teeth in a zip. That tight arrangement strains the molecules, more than doubling the energy they store, up to where approximately a kilogram would be enough to boil a kettle.

Solar thermal fuels promise extra versatility compared to existing ‘solar thermal’ power generation technology, which stores the Sun’s energy as heat. ‘They store energy at ambient temperatures in the form of structural isomerisations,’ explains Timothy Kucharski, who works in both Jeffrey Grossman’s group at Massachusetts Institute of Technology and Daniel Nocera’s at Harvard University. Light triggers isomerisation in one direction, and the reverse isomerisation then releases that energy as heat, driven in the new molecules by a different wavelength of light, or heating. ‘Because of this, solar energy is stored in a way that's distributable, enabling off-grid, on-demand heat delivery,’ Kucharski says. 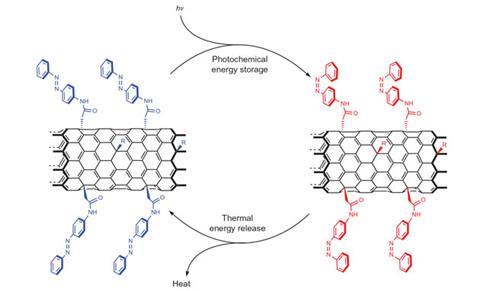 Grossman and MIT’s Alexie Kolpak had previously modelled solar thermal fuels from azobenzene-functionalised nanotubes2 and calculated that related chemicals could store energy at similar densities to lithium ion batteries.3 That modelling showed that strain arising from interactions between photoswitchable groups densely packed on rigid nanostructures could double or treble energy storage in each molecule. Kucharski therefore set out to make the desired structures, but struggled to get the azobenzene packing as high as should have been possible. Nevertheless, the way the molecules zipped up together – a process modelling hadn’t envisaged – achieved the strain levels they sought.

Kasper Moth-Poulsen, who studies solar thermal fuels at Chalmers University of Technology in Gothenburg, Sweden, says this is the first time he’s seen this ‘templating’ effect. ‘The most notable aspects are the factor of two increase in energy storage and the ability to operate the system through more than 2000 cycles without significant degradation,’ he says.

Kucharski and his co-workers are already looking beyond this ‘proof of concept’ system, as nanotubes are expensive and unhelpfully absorb light they’d prefer reached the chromophores. They are also trying to get the charging to happen as quickly as possible. ‘One target that seems within reach is to be able to charge enough fuel during a single day’s sunlight hours to cook a dinner for a family,’ Kucharski explains.