Scientists in the US and Italy have borrowed a technique more usually associated with geophysical remote sensing and applied it to medieval artwork - with stunning results. The near-infrared hyperspectral imaging of a leaf from a 15th century illuminated manuscript has produced a map of the pigment binders used by the artist. The technique will not only allow conservation specialists to better plan strategies for restoring and stabilising paintings, but will also give art historians new insights into the materials and methods favoured by individual artists. 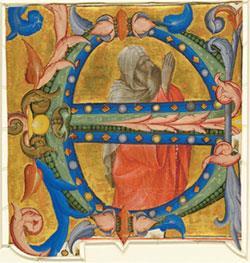 Art historians and conservationists need detailed information about materials used by artists, such as the pigments and the organic binding agents, for example gum Arabic or egg white, which were used to carry the pigment. In some cases it is possible to remove tiny samples from the artwork for analysis, or to use imaging techniques on a small area of the work. But until now it has been difficult to obtain an overview of the materials used across the work as a whole.

John Delaney, senior imaging scientist at the National Gallery of Art in Washington, DC, led the team that developed the new instrument. ’We have used near infrared to look at the vibrational features related more directly to the structure of the molecule using optimally designed hyperspectral mapping cameras,’ he explains. ’The problem is that typically these cameras operate in bright light, whereas illuminated manuscripts can only be exposed to very low light.’

The team used their system to scan a leaf of manuscript depicting the letter E and a praying prophet (pictured), painted in Italy by the monk Lorenzo Monaco. A white light source is directed at the artwork and the reflected light collected, dispersed into a spectrum and analysed. To the team’s delight, the approach worked. ’These near infrared vibrational bands are weak and muddled,’ Delaney says. ’It is not an easy thing to do and people are surprised that it is possible to use them under such low light conditions in a diagnostic manner. To be honest, it was a bit of a surprise to us.’

Intriguingly, the technique picked up a signature of fat in the binder in a specific part of the scene - the kneeling prophet. The rest of the paint had no fat in the binder. It is likely, says Delaney, that the fat was from egg yolk, coming from a binder made from whole egg - called tempera - rather than just the white. ’The use of egg tempera is surprising, as traditional sources list gum Arabic and egg white as the binder most widely used by illuminators.’ The finding points to this artist having an idiosyncratic style, possibly informed by his experience of panel and fresco painting, where egg tempera was a more widely used binder.

Ashok Roy, director of science at the National Gallery in London, is enthused by the study. ’This is a tremendous piece of work and a great advance for the analysis of works of art,’ he says. ’It is very hard to understand binding media used in the paint of manuscripts because there is no prospect of being able to take paint micro-samples. The technique that these researchers are developing will be very important for defining the history of technology of illuminated manuscripts and anything else of that kind.’