"This really gets at the foundation data for the dominant view of long-term memory formation" - Paul Gold, University of Illinois at Urbana-Champaign, US

Memory researchers have agreed for more than 20 years that the first step in the formation of long-term memories is the synthesis of new proteins.

The main evidence for this principle was that long-term memory formation could be prevented, and amnesia induced, by administering a protein synthesis inhibitor.

Now, in a rat study of learning and memory, researchers at the University of Illinois at Urbana-Champaign have shown that injecting the protein synthesis inhibitor anisomycin into a region of the brain linked to memory processing (the amygdala) causes major disruption to neurotransmitter levels. 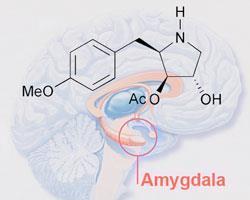 The levels of noradrenalin, dopamine and serotonin in the amygdala of the rats rocketed by 1000-17000 per cent shortly after the injection of anisomycin. They then fell to levels well below baseline for the following 8-48 hours.

’Anisomycin has been used to prove the importance of protein synthesis in long-term memory formation, because although animals given the drug show some initial signs of memory, within a few hours, the memory has been lost,’ said lead researcher Paul Gold of the psychology and psychiatry department at the Institute for Genomic Biology, University of Illinois Urbana Champaign. ’What we’re saying is that the results of those studies are absolutely correct, but that the interpretation of those results might not be correct.

’We’ve shown that the drug has a major additional action which can account for those effects - it results in very large fluxes in the neurotransmitter release in that same brain area,’ said Gold.

’This really gets at the foundation data for the dominant view of long-term memory formation,’ he concluded. Gold added that this could lead to a new direction in clinical research for memory disorders such as Alzheimer’s disease.

"Their findings do not rule out the role of protein synthesis" - Steven Rose, Open University, UK

Steven Rose, professor of biology and director of the Brain and Behaviour Research Group at The Open University, UK, said: ’I have no reason to doubt the findings - indeed some of us have been saying since the 1970s that it is important to look at other effects of protein synthesis inhibitors such as anisomycin.

’However, their findings do not rule out the role of protein synthesis. It’s just that you need other evidence as well and there is that evidence in plenty.’