Chemists in Germany have taken a leaf out of nature’s book to develop a new, low-cost, iron-based catalyst powered by light that can extract hydrogen from formic acid.

Formic acid is one of the major products formed during biomass processing, and has been widely investigated as a stable and readily available carrier for hydrogen, which could subsequently be used in fuel cells. However, pulling the hydrogen out of the formate relies on expensive catalysts based on noble metals. The new catalyst is based on inexpensive iron, and as it can be driven by sunlight does not require fossil fuels to provide energy to activate it.

In nature, iron-based hydrogenase enzymes are highly efficient at producing hydrogen. The iron centres within the enzyme are stabilised by coordinating groups within the surrounding protein. The team from the University of Rostock, led by Mathias Beller and Ralf Ludwig, created their catalytic system by screening a large number of organometallic compounds in the presence of various ligands to stabilise the iron centre - akin to an enzyme - that would decompose formic acid into hydrogen and carbon dioxide.

The best catalyst system identified was triirondodecacarbonyl [Fe3(CO)12] in the presence of triphenylphosphine, 2,2’:6’2’’-terpyridine and dimethylformamide.

These ingredients form a catalyst in situ, which is activated by visible light. ’We do not know all the details of exactly how the system works,’ Ludwig says. ’The ligands are stabilising the catalyst, enabling it to run for longer - if they were not there the iron would drop out of the system.’ 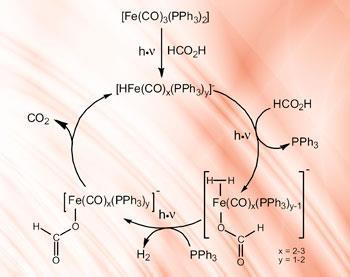 When the system is exposed to visible light in the presence of formic acid, hydrogen and CO2 are produced; when the light is switched off, the reaction stops.

’This means we can use sunlight to release hydrogen so we do not need conventional energy such as from fossil fuels,’ says Ludwig, adding that it should now be possible to experiment with modifying the iron compound and the ligands to produce a more efficient catalyst that is activated by optimal wavelengths of light.

Justin Hargreaves, a catalyst expert at the University of Glasgow in the UK, says that the work represents a ’significant advance’ in the search for new, non-noble catalysts for hydrogen generation from formic acid, and ’will stimulate further activity in this area.’

Edman Tsang, of the University of Oxford, who has investigated the feasibility of a ’formic acid economy’ says, ’Although only a moderate catalyst turnover number is obtained at present, the inexpensive and convenient combination of iron complex and ligands with simple switching on and off the light source have moved the technology a step forward towards applications.’ In terms of practical applications, Tsang suggests the next challenges will be to address catalyst separation issues and move away from the use of organic solvents and excess additive.