Connecting two or more cyclophophazene units via covalent linkers paves the way for the assembly of simple novel polycations.

Scientists at the University of Liverpool, UK, have established a new route to the synthesis of novel polycations. This is an important step in the development of new and improved systems for applications such as drug delivery and as polyelectrolytes and membranes.

"In particular, polycations, which slowly degrade in a specific chemical environment, are highly sought after for the delivery and release of drugs into target cells." - Alexander Steiner

For the first time, Mark Benson and Alexander Steiner have shown that two cyclophosphazene molecules can be joined via N-centres with covalent linkers. To date, only non-covalent linkages have been described where N-centres play a role between phosphazenes.

Previous experiments had shown that the nitrogen atoms in some phosphazenes are not as inert as previously thought, and that they are in fact reactive towards various electrophiles. This idea inspired Benson and Steiner to use difunctional electrophiles to insert a covalent link between two phosphazene rings, which at the same time added two positive charges onto the system. They believe that the stability of the polycationic assembly is controlled by the nature of the linker. 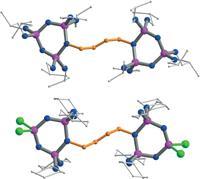 The use of bridging groups in this manner is an innovative way to build large structures with predictable molecular architectures. This new route, in conjunction with the ability to add various substituents, opens up the possible synthesis of a multitude of di- and polycations for a variety of applications. ’In particular, polycations, which slowly degrade in a specific chemical environment, are highly sought after for the delivery and release of drugs into target cells,’ said Steiner.