US researchers have found a small-molecule drug that could help guard against tissue damage in heart attacks and heart surgery, if its effects on rats can be replicated in humans.

Now researchers led by Daria Mochly-Rosen of Stanford University have identified a small molecule, N-(1,3-benzodioxol-5-ylmethyl)-2,6-dichlorobenzamide, or Alda-1, that reduces the extent of tissue damage in rats undergoing a heart attack. They hope the compound might have the same effect in humans and say that, at a molecular weight of 324 Daltons, it could be easily modified to produce heart-protecting drugs.

Alda-1 appears to guard rats’ hearts by activating a well-studied enzyme, aldehyde dehydrogenase-2 (ALDH2). ALDH2 has previously garnered attention for its role in metabolising alcohol: it breaks down toxic aldehydes produced as a side-product of ethanol metabolism. Over a third of Asian people carry a mutant version of the enzyme - and are therefore alcohol intolerant.

Mochly-Rosen was surprised to find that ALDH2 was found in heart tissue that appeared to be better protected when its oxygen supply was cut off. ’We decided to measure the activity of the enzyme against the size of infarcts (lesions, or tissue damage, caused by ischaemia) and the correlation was just amazing,’ she says. 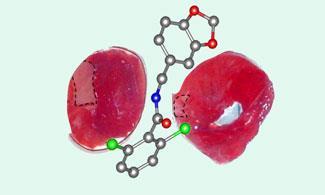 The researchers think that ALDH2 protects the heart by disposing of another toxic aldehyde, 4-hydroxynonenal, that accumulates during ischaemia as a result of free radical action. And the Alda-1 molecule, which emerged as the best activator of ALDH2 from a library of screened compounds, probably shields ALDH2’s active site from attack by these toxic aldehydes.

According to Mochly-Rosen, Alda-1 could be given to boost ALDH2 activity in those at the greatest risk from cardiac ischaemia, including patients with a history of heart disease and patients undergoing bypass surgery. The drug could be of particular benefit to Asian heart patients because it appears to activate even mutant versions of the ALDH2 enzyme.

Saadeh Suleiman, who studies cardiac ischaemia at the Bristol Heart Institute, says the research is initially exciting. However, he thinks that in humans, ALDH2 might not be such a good target as it is in rats, which were only subjected to temporary loss of oxygen supply. ’Our hearts have coronary disease which develops over years, so whether the same enzyme that we’re talking about here is also functional and available in human coronary disease, we don’t know,’ he says. ’We can’t really judge anything at this stage.’

Mochly-Rosen agrees that these are still early studies. However, her team are already setting up animal models for other diseases that may be associated with mutant ALDH2, including Alzheimer’s and Parkinson’s. ’We’ve been looking for increased incidence of patients with this mutation and we think maybe these are diseases in which activating the enzyme will be beneficial,’ she says.