Scientists in the UK have developed a compound to combat the hepatitis C virus that could be taken as a pill.

David Pryde and his team from Pfizer Global Research and Development, Sandwich, have made new compounds to activate a protein in the immune system called TLR7 - toll-like receptor 7 - which fights the infection. Toll-like receptors identify foreign DNA, such as a virus, and produce proteins that inhibit the virus’ replication.

300 million people suffer from hepatitis C worldwide. The virus that causes the disease resides in the liver and can lead to cirrhosis, with some sufferers requiring liver transplants. Current treatments only cure half of patients and are administered intravenously. Recent research has focused on increasing the effectiveness of the drugs and on developing oral treatments.

Pryde’s team made heterocyclic analogues based on the structure of purines, known activators of TLR7 and the basis of current oral drugs. ’The most potent TLR7 agonists are purine-based,’ explains Pryde. ’But we wanted to design potent non-purine based agonists to maximise the chances of avoiding any unwanted off-target pharmacology.’ 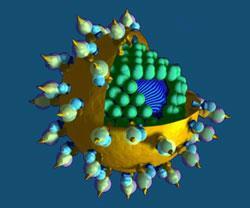 The compounds activate a protein in the immune system, which fights hepatitis C

When they tested the compounds against a hepatitis C cell line, the team found that one of the compounds, a trifluoromethyl derivative, was highly selective for TLR7. The agonist also had comparable performance to injected alternatives at doses below 50mg.

’Medicinal chemistry is often castigated for surrendering synthetic elegance in order to gain compound access. Pryde elegantly repudiates this, accomplishing both elegance and access,’ says Adam McCluskey, an expert in drug design and discovery from the University of Newcastle, Australia.

Pryde and his team hope to make the agonist more soluble and to increase its potency further before moving on to human trials.