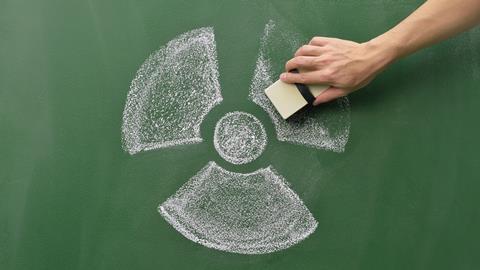 A new ligand has been shown to remove record amounts of uranium from the bones of irradiated mice. The in vivo treatment also helped to protect the mice’s kidneys from radiation damage by preferentially binding the metal ions and promoting their excretion.

When someone is exposed to uranium, their body automatically strips about two thirds of it from their blood plasma and excretes it. Unfortunately, without treatment, the remaining third remains in circulation before settling in the kidneys and bone tissue as a hexavalent uranyl ion (UO22+). From there, the ions can cause extensive health problems over time, including kidney damage and brittle bone disease.

As a result, patients need therapies that are capable of removing uranium from tissue. The most promising avenue for this type of treatment is chelation therapy, which involves dosing a patient with a ligand that binds to the metal to create a complex that can be excreted. Currently, there are only two drugs using this approach that have been approved by the US Food and Drug Administration to treat actinide exposure, both of which use a chelating agent called DTPA, which is not very effective at binding uranium (VI).

As uranium is a staple factor in nuclear power and is therefore a likely source of contamination, Shuao Wang and colleagues at Soochow University in China were interested in identifying potential new ligands for treating exposure. The team focused on a group of molecules called HOPO (hydroxypyridinone) ligands, which have low toxicity and have been shown to be effective at removing uranyl ions from tissue, but which suffer significantly reduced binding at low ligand to metal ratios. 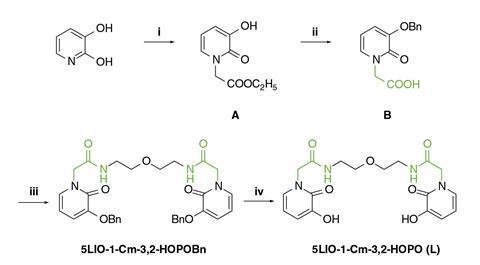 Synthesis of 5LIO-1-Cm-3,2-HOPO, which can help remove uranium from mouse bones when administered after radiation exposure

The researchers theorised that they could improve binding by disrupting the intramolecular hydrogen bonds that form between the amide group on one side of the HOPO ligand and the hydroxide group on the other. To do so, they synthesised a new ligand, 5LIO-1-Cm-3,2-HOPO, which puts a methyl group between the two sides of the molecule and prevents the hydrogen bonds from forming.

The approach was largely successful; early tests in mice demonstrated that without the intramolecular hydrogen bonding, the new ligand has significantly increased uranium coordination affinity over other HOPO molecules in both kidneys and bones. Its activity in removing uranyl ions from bone tissue was of particular interest, demonstrating a removal efficiency in the femurs 6 times higher than that of another HOPO ligand, 5LIO-(Me-3,2-HOPO). It was also shown to be an effective chelation agent when administered up to 48 hours after initial uranium exposure, a highly attractive prospect as many patients cannot be treated immediately after a nuclear accident.

Sidney Katz, an emeritus professor of chemistry from Rutgers University in the US, tells Chemistry World the work demonstrates ‘experimental and computational chemical virtuosity’. ‘The potential for 5LIO-1-Cm-3,2-HOPO to become an effective decorporation agent for uranium is evident in this article,’ He adds. ‘But before this potential can be realised, a comprehensive toxicological assessment is needed.’

As well as determining the ligand’s mode of action and efficiency, the team tested different delivery methods and dosing approaches to identify if it could be made into an oral treatment. Their results show that while injected mice had the best levels of uranium excretion, mice that were given the ligand orally also saw significant improvement. Wang and his colleagues are therefore hopeful that 5LIO-1-Cm-3,2-HOPO could be developed into an effective therapy for uranium exposure.