It may be slimy, slippery and rather unpleasant, but seaweed actually has a surprisingly wide range of uses, being a common source of food, chemicals, medicines and cosmetics. It may soon also be a source of biofuel, thanks to an engineered microbe able to transform seaweed directly into ethanol.

Seaweed has a number of important advantages over other biofuel feedstocks. Unlike maize and sugarcane, it isn’t grown on fields that otherwise would be producing food and unlike wood and energy crops, such as switchgrass, it doesn’t contain any lignin, which makes the sugar molecules in it much easier to release.

As a consequence, seaweed is garnering an increasing amount of interest as a potential biofuel feedstock, especially in countries with extensive coastlines. Last year, Norway opened its new Centre for Seaweed and Kelp Technology, which will focus on developing ways to generate energy from seaweed. 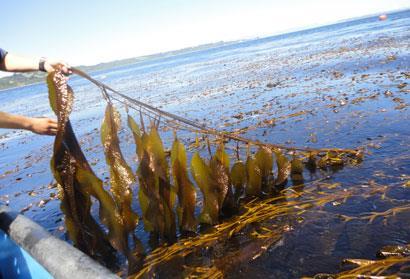 Farming seaweed could be a cheap way to produce biofuel

Unfortunately, although it’s easy to release sugar molecules from seaweed, it’s not at all easy for microbes such as yeast to ferment those sugar molecules into ethanol. Brown macroalgae, a seaweed found all over the world, especially in colder seas, mainly contains the sugars glucan, mannitol and alginate. Yeast can ferment glucan pretty well, but struggles with mannitol and has no luck at all with alginate.

So, scientists at the US advanced biofuel company Bio Architecture Lab set about genetically engineering a microbe that could ferment alginate, which meant endowing it with a daunting list of abilities. As well as being able to produce a class of enzymes known as alginate lysases, which break down alginate into smaller sugar molecules, the engineered microbe also needed to secrete those enzymes into the external environment, where they can interact with the seaweed. It then needs to be able to transport the sugar molecules into its body and ferment them into ethanol.

Fortunately, the scientists found many of the genes needed to perform these feats in a single marine bacteria called Vibrio splendidus, although transferring them over into the laboratory workhorse Escherichia coli proved no easy matter. ’It required multi-gene components comprising over 20 genes,’ Yasuo Yoshikuni, lead scientist and founder of Bio Architecture Lab tells Chemistry World. To complete the organism they added a fermentation pathway and deleted some E coli genes that might interfere with the whole process.

Testing this engineered E coli strain on a species of brown algae, Saccharina japonica, the scientists found that it was indeed able to ferment alginate into ethanol. Furthermore, this bacterium also proved better at fermenting mannitol than conventional yeast. As a result, it was able to synthesise ethanol from seaweed at a rate of 0.64g/litre/hour, representing over 80% of the maximum possible yield.

Yoshikuni and his colleagues are now using this engineered E coli as the basis of a commercial production process. The company is currently constructing a pilot plant in Chile, where they already operate four seaweed farms, and expects it to become operational in July.