US researchers have made nano-sized boxes from nickel and tin - marking the first time that patterned 3D structures have been built on the nanoscale. The boxes and fabrication process could have great potential for making interesting nanostructures, for applications ranging from electronics to drug delivery.

’I’m interested in miniaturising the world,’ says David Gracias, who led the research at Johns Hopkins University in Baltimore, US. ’We have a lot of nanotechnology techniques that allow us to build very well in 2D - but building in 3D is more difficult.’

The cubes resemble tiny dice around 100nm in size - patterned on each side with the university initials, JHU, in lines as thin as  15nm. ’Patterning in 3D is just as important as building in 3D,’ Gracias adds. ’This is because a complex surface allows the construction of circuits or attachment of substrates for biological or optical purposes.’

Construction of the boxes started with a flat cross-shaped template, made from square ’panels’ of nickel joined together by ’hinges’ of fragmented tin, all fabricated on a silicon substrate. When heat is applied to the template, the tin grains liquefy and melt together, creating torque that folds and lifts the plates into place, making a cube. 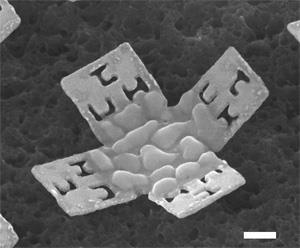 Using a foldable template means that the panels can be etched in 2D beforehand - either punctured with holes or inscribed with metal such as gold. A downside of the technique is that it requires two treatments of electron-beam lithography - firstly to make the templates, and secondly to etch the sides of the cube away from the silicon surface so they can lift up. This second process is also the source of the heat needed to melt the tin hinges.

By adjusting the amount of tin in the hinge, the angle of the fold can be changed. The team is hoping to use this to design other interesting shapes like four-sided pyramids or maybe even 12-sided dodecahedrons.

This is fantastic work - it uses a very unconventional approach to make unique 3D structures,’ says Stephen Chou, a nanotechnology expert at Princeton University, US. ’I can see many applications of such a creative nanofabrication method in sensors, nanofluidic devices, and others.’

’The idea of folding up 2D structures is not radically new, but it is amazing to see how this strategy can be used to build such complicated structures,’ says Chengde Mao, at Purdue University, Indiana, US. The boxes themselves may also prove useful in certain applications; they are metallic and quite stable, so there could be potential in storage, transportation, labelling or confinement, Mao notes.