Two research centres were officially launched in May

Two research centres hoping to add new dimensions to UK chemistry were officially launched in May.

Nobel laureate Robert Grubbs opened the University of Cardiff’s ?4.2 million centre for physical organic chemistry, which its leader Barry Carpenter hopes will rejuvenate a subject that has suffered a UK decline since the 1980s, with PhD student numbers falling fast. The country’s weakness in the field was noted in the Engineering and Physical Sciences Research Council’s (EPSRC) 2003 international assessment of UK chemistry research. Following this review, the EPSRC awarded ?3 million to Cardiff’s centre, and, this year, to a new physical organic chemistry program at WestCHEM, the combined research school in chemistry formed by the Universities of Strathclyde and Glasgow.

’The Cardiff centre for physical organic chemistry will serve as a focal point to re-invigorate this area of research activity, and to re-establish the UK as a major player in this field of research in the international arena,’ said Kingsley Cavell, head of Cardiff’s school of chemistry. 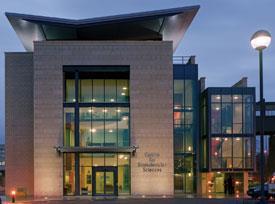 Over 300 researchers will work at Nottingham’s CBS

Carpenter told Chemistry World  that industry was also calling for students to be better educated in physical organic chemistry, so he planned to revamp the undergraduate curriculum and bring it up to date with recent changes in the subject. ’The centre is a good start [for physical organic chemistry] but I hope that with Strathclyde we will be able to cooperate to make a national network,’ he said.

Cooperation is also central to the University of Nottingham’s ?25 million centre for biomolecular sciences (CBS), launched on 11 May, which brings together researchers from seven different schools: chemistry, medicine, mathematics, engineering, pharmacy, molecular biology and human development.

Head of chemistry Mark Searle said the CBS was the university’s largest ever research structure, bringing Nottingham’s biomolecular sciences on a par with other major UK research centres at Manchester and Southampton. The combination of so many facilities meant the centre would work along industry lines, said Searle, so that chemists, cell biologists and tissue engineers could cooperate in the same building, allowing a full scale medicinal chemistry approach for discovering potential new drug molecules.