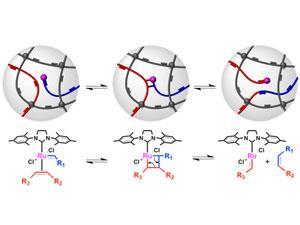 Cross-linked polymers are important because they are mechanically strong and resistant to heat, wear and attack by solvents. However, they are relatively inflexible when it comes to their processing properties because they are insoluble and infusible. Once they have been formed they cannot be reprocessed, unlike thermoplastics, for example, which can be processed repeatedly.

Now, a team led by Zhibin Guan at the University of California, Irvine, has demonstrated that the insertion of a catalyst into the polymer network that promotes the breaking and re-forming of bonds can make the polymer malleable. The researchers took samples of the cross-linked polymer polybutadiene (PBD), a commercially important product that is widely used as synthetic rubber. They infused the polymer network with a ruthenium-based Grubbs' catalyst. This promotes olefin metathesis, effectively the swapping of bonds between two adjacent olefins.

Ordinarily, while PBD can have varying degrees of elasticity depending on the extent of cross-linking, it is not malleable. However, when the ruthenium is present within the polymer, double bonds between different carbon chains in the polymer start to break and reform. 'If a force is applied during this process, the bond swapping can release the tension,' says Guan. In this way the polymer can be re-shaped, whilst ultimately retaining the same degree of cross-linking and the same number of double bonds as in its original state. 'All that we are changing is the topology of the network,' says Guan. The more ruthenium catalyst present, the greater the degree of malleability that can be achieved. The action of the ruthenium can be easily deactivated by adding vinyl ether, enabling the new shape to be set.

'This approach can make cross-linked polymers much more versatile and adaptable while retaining their important mechanical properties,' says Guan.

However, Ezat Khosravi, a polymer chemist at the University of Durham in the UK with expertise in metathesis, has doubts about the technological significance of the process. The need for a chlorinated solvent for the metathesis to take place is, says Khosravi, 'very undesirable'. Furthermore, he adds, 'The likelihood of the double bonds in the network rapidly exchange via metal catalysed olefin metathesis to alter the topology of the network, as it is claimed, is very low as the double bonds in cross-linked PBD samples will not be easily accessible. The effect of the chlorinated solvent on the cross-linked PBD has not been investigated to rule out malleability due to plasticisation induced by the presence of chlorinated solvent, in this case dichloromethane. It would be beneficial to see more extensive rheological testing on the uncross-linked and cross-linked - after treating with solvent - PBD samples in the presence and absence of the ruthenium initiator.'