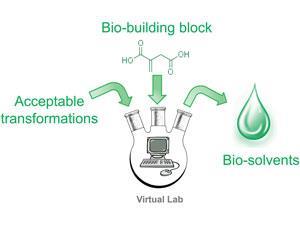 Finding clean, sustainable alternatives to petroleum-derived solvents and chemicals is a matter of increasing urgency in the chemical industry worldwide. Concerns over health, safety, economic and legal issues, together with a need to minimise the environmental impact of industrial processes have led to increased interest in developing new solvents, particularly those derived from biomass. While a number of computer-aided organic synthesis tools have been developed to aid molecular design and synthetic planning over the past few decades, they have not found widespread application in commodity chemical synthesis.

Biomass can be converted into new solvents via thousands of chemical transformations though in practice, few are industrially relevant. GRASS considers many parameters including cost, conditions, reagents, safety profile, atom economy, versatility, workability on a large scale and frequency of use in industry. The software gives easy access to a large number of potential commodity chemicals from a chosen set of bio-based building blocks via industrially relevant reactions.

Aubry believes that GRASS will find real-world applications in industry as ‘the software allows generation of structures that are potentially interesting and that could be used as “hints” or as “head of series” that chemists should consider. It also proposes synthetic pathways.'

José I García, a green chemistry researcher for the Spanish National Research Council (CSIC) at the University of Zaragoza, praises the huge effort made by the team to distil out a compact set of chemical transformations already common in current industrial processes, whilst keeping an eye on their greenness. He says ‘the modularity of the system allows its continuous revision to tune and improve its application.’ However, he also notes that the decision by the researchers to completely remove halogenated solvents means that some interesting reagents and/or reaction pathways might be ignored.

After successfully testing GRASS on glycerol and itaconic acid, and highlighting compounds to replace hazardous solvents such dimethylformamide (DMF) or N-methyl-2-pyrrolidone (NMP), the team plan to extend the software for emerging bio-building blocks. In order to efficiently sort all of the virtual structures generated by GRASS, they say prediction models have to be improved to allow accurate prediction of physico-chemical properties such as melting points. This will enable automatic sorting of structures to highlight the most relevant ones depending on the target application.