Electron microscopy technique discriminates between carbon atoms with one, two and three bonds

A new, low voltage electron microscopy technique allows scientists to discriminate not just between atoms of different elements but between atoms of the same element in different electronic states. The researchers who developed it say it could be broadly applied to analyse the fine structures of nanomaterials and important biological molecules. 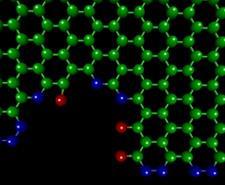 Kazu Suenaga and Masanori Koshino at the National Institute of Advanced Industrial Science and Technology in Tsukuba, Japan, used a low voltage, scanning transmission electron microscope (Stem) to probe carbon atoms in graphene. By measuring the energy lost when electrons hit individual atoms, they were able to tell a carbon atom with one bond from others with two or three.

The team used a probe just 0.1nm in diameter to zone in on single atoms. ’In the past, if you were using some other technique, you could do spectroscopy for a local area of 1,000 atoms or a million atoms, something like that,’ explains Suenaga. ’Now, with a very tiny probe, we can measure from single atoms.’

Although there have been previous reports of identifying elements from a single atom using similar methods, this is the first time specific spectral peaks have been obtained from specific atoms, according to Stephen Pennycook, a Stem specialist at Oak Ridge National Laboratory, Tennessee, US. ’It’s almost like seeing bonds one by one,’ he says.

The achievements are impressive, says Pratibha Gai, chair of electron microscopy at the University of York’s Jeol Nanocentre in the UK. ’The ability to record the reported data is a remarkable feat given the instabilities and inevitably very weak signal,’ she adds.

Gai thinks the method should be applicable to other nanomaterials. And as Suenaga points out, exploring the atomic level structures of nanodevices will become increasingly important. But for now, he has other plans for the technique - for instance, in identifying the active atoms in individual molecules in order to predict how chemical reactions will occur. Previously this has only been possible through theoretical calculations, which would take too long in big molecules like proteins. Another idea is to use the technique to understand why, in solar cells, some silicon atoms perform less well than others.