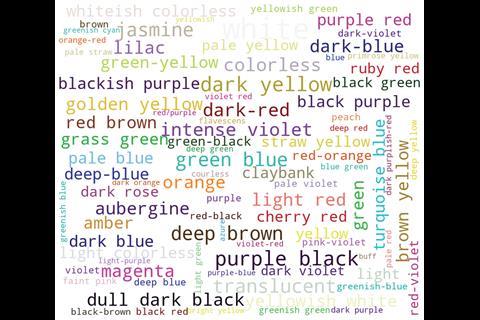 Words used in the CSD to describe colours. The size of the words is proportional to their frequency 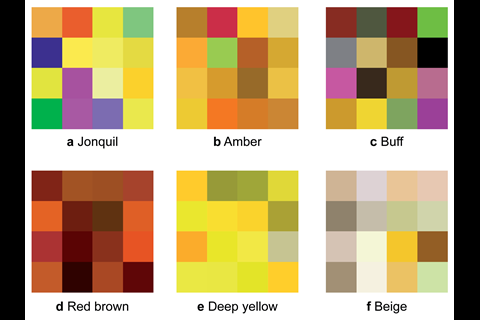 Examples of the spread of some colours in the Twitter survey. The plots show nine random samples from the survey results for each colour name

Records for around 9000 of the over 100,000 MOFs listed in the Cambridge Structure Database (CSD) include a colour. A Twitter survey by Berend Smit and colleagues at the Swiss Federal Institute of Technology Lausanne (EPFL) saw participants assign 4184 different colours to the 162 colour names used to describe MOFs in the CSD. The survey highlighted just how subjective colour descriptions are. Now, Smit’s team has developed two web applications to help users maintain objectivity when using colours to describe their MOFs.

The first app, called Color Calibrator, assigns tristimulus values to MOFs. Tristimulus values are a mathematical way to represent colour. Where one person identifies a colour as cherry red and another calls it poppy red; these values will represent the same colour. Users upload an image of their MOF alongside a colour calibration card and the app can be set to automatically upload the colour information in a standardised format to an electronic lab notebook.

The second app, called MOF colorizer, predicts the colour of a MOF based on its structure. Smit’s team encoded a variety of structural information to allow for colour predictions based on all possible features. A machine-learning model then analyses the structures to generate a colour name, based on the most likely colour descriptor according to data from the Twitter survey.

Since properties linked to optical applications are often the same properties that give rise to colour, and since colour can indicate a successful synthesis, the team suggest their apps could help chemists designing and synthesising structures for specific applications. They also suggest that creating large-scale objective data sets could change the way scientist think about reporting new structures.